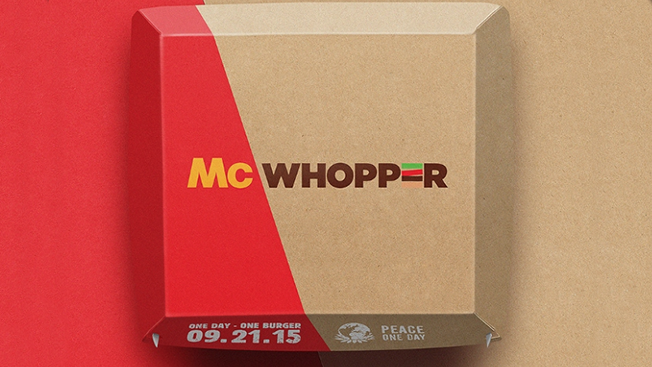 Could the Burger Wars see peace in our times? Probably not, despite Burger King's best efforts at calling a temporary truce (while cooking up publicity).

Burger King today purchased a full-page ad in both The New York Times and the Chicago Tribune, asking McDonald's to partner with its longtime rival to create the McWhopper in honor of the upcoming Peace Day.

But don't get too excited about the idea of a combined Big Mac and Whopper just yet—McDonald's CEO Steve Easterbrook turned down the offer.

According to Burger King's proposal, the two burger chains would combine forces on Sept. 21, Peace Day, to create the McWhopper, and proceeds would have gone to the Peace One Day charity. Given McDonald's headquarters in Chicago and Burger King's base in Miami, the McWhopper would be sold midway, in Atlanta. Alas, McDonald's quickly turned down Burger King's offer in a Facebook post, though the brand did note that it was for a "good cause" and a "great idea."

"We love the intention but think our two brands could do something bigger to make a difference," said Easterbrook. "We commit to raise awareness worldwide, perhaps you'll join us in a meaningful global effort?"

Easterbrook cheekily added, "P.S. A simple phone call will do next time."