Bud Light Created a Smart Fridge That Tells You When You’re Out of Beer, and We Tested It

Beer giant's entry into the Internet of Things 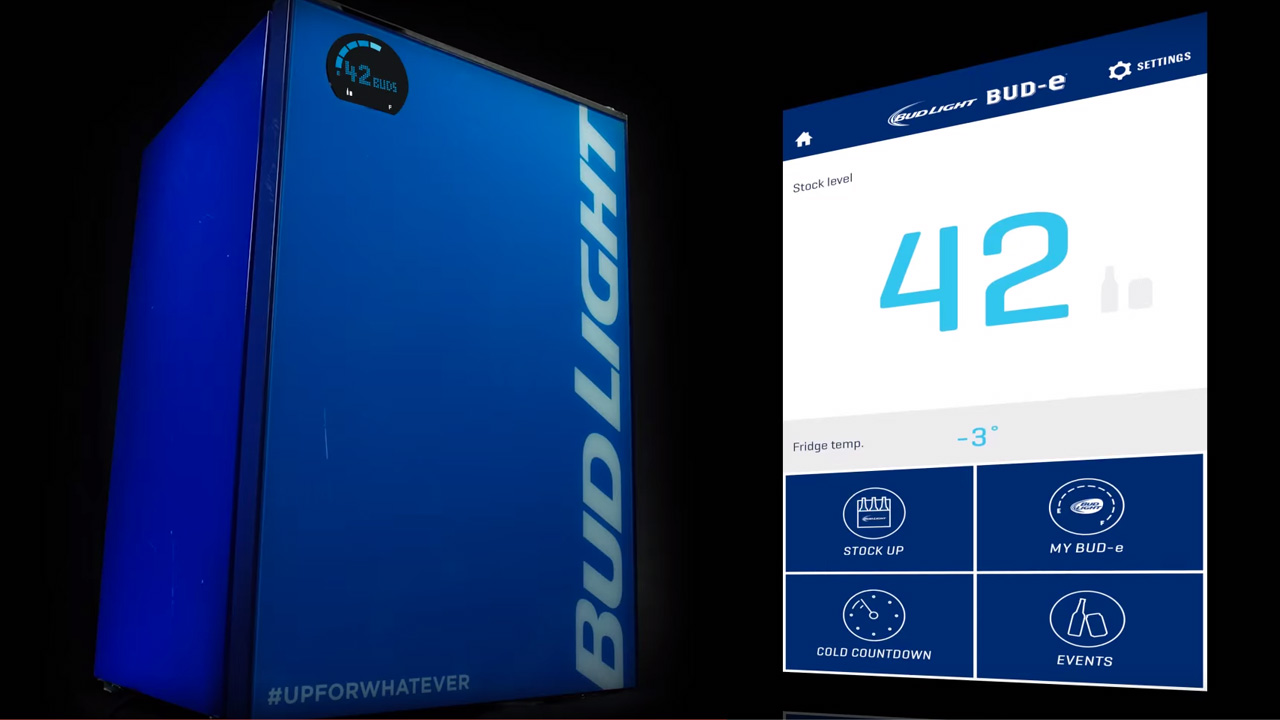 Today Bud Light is launching its first foray into the Internet of Things with the Bud-E Fridge, a smart refrigerator that alerts you when you run out of beer, your six-pack is perfectly chilled, or someone dares to remove a can. Essentially, it's a mini-fridge for people who really care about their beer.

The Wi-Fi-connected device works in tandem with an app that sends the alerts right to your phone. Created in partnership with Buzz Connect and Linq IQ, the fridge sells for $299 and holds up to 78 beers—including 60 12-ounce bottles and 18 12-ounce cans. For now it's only available in California. But if demand is high, then Bud will consider rolling it out nationally next year, according to a rep.

Released as the NFL season springs into action, the high-tech fridge is the beer giant's latest play to woo football fans. This summer, Bud Light released 28 team-specific can designs.

"The Bud-E Fridge should appeal to the core Bud Light consumer, and we see it being particularly popular this time of year with football fans," said Azania Andrews, Bud Light's senior director of consumer connections. "The Bud-E Fridge app allows users to register their favorite NFL teams, receive updates when the game is approaching, and will also provide an update on the Bud-E Fridge's supply levels, making sure they're always stocked for game day."

Most tellingly, though, Bud Light's release of the fridge is tied to the surge in mobile use. "As mobile screens increasingly shift from being a second screen to being the primary screen, now is the perfect time to introduce the Bud-E Fridge‎, given the key role its accompanying mobile app serves in enhancing the experience of consumers," said Andrews.

Last week, Adweek tested the fridge and app in our offices. Here's what to expect if you take the plunge and purchase one:

Bud-E is larger and bulkier than the average mini-fridge (too large to slide under a desk). Instead of a typical fridge that holds a variety of drinks and snacks, Bud-E's interior looks like a vending machine with slots designed to hold and count beer.

It seems to have been designed with a bustling frat house in mind, where there might be a real risk of losing your beer to your housemates at any time. The app, while easy enough to use (available on Apple and Android phones), primarily lets consumers keep track of their beer.

There are a few fun app functions, though, like a countdown timer that indicates when the beer inside is cold enough to drink, and an alarm that will tell you when the fridge has been opened. The most useful feature will probably be the app's integration with beer-delivery service Saucey, which allows consumers to order beer to be delivered right to their homes if they're in Los Angeles, San Francisco or San Diego.

The exterior of the Bud-E has a digital display, which can list the number of beers inside, the temperature, or whatever you'd like it to say—there's an option on the app to configure the display. And there's a speaker that plays a twinkly jingle each time the fridge is opened and, on NFL game days, will play victory songs. It is also distinctly branded, coming in bright blue and adorned with Bud Light's logo vertically printed on the right side.