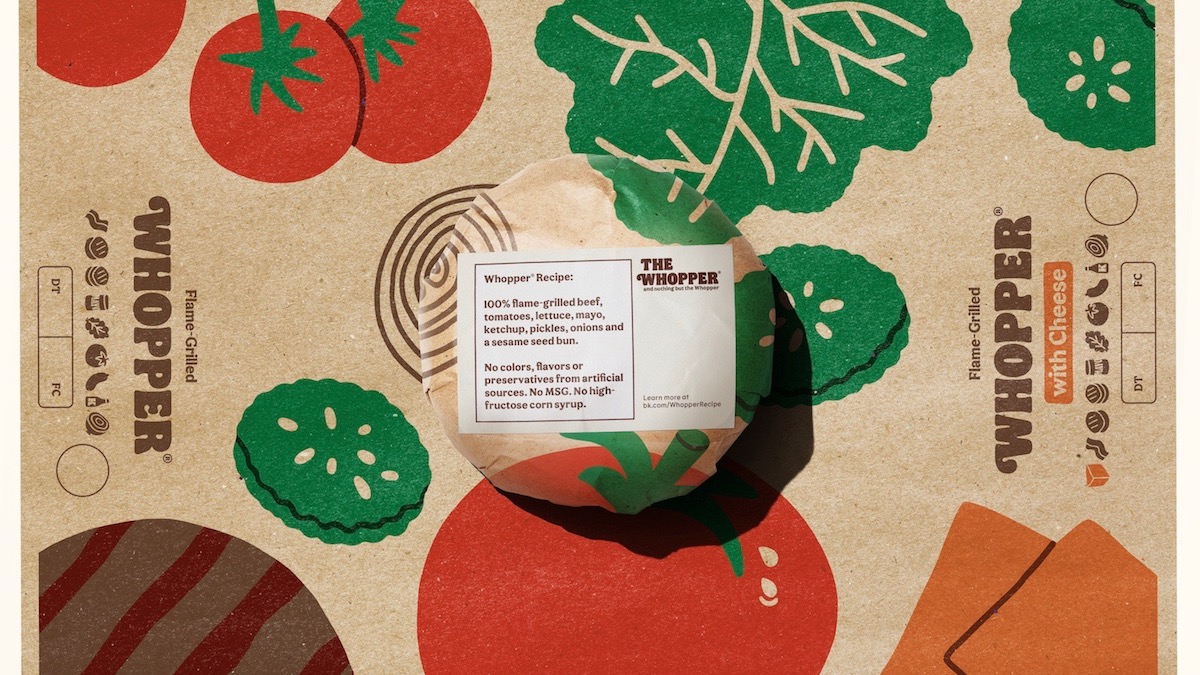 In the next step of its campaign to showcase its uncomplicated, preservative-free ingredients—which began with the showstopping Moldy Whopper campaign earlier this year—Burger King has placed its ingredient list right on the Whopper’s wrapper. David Miami designed the limited-edition wrappers, which list what’s inside: beef, tomatoes, mayo, lettuce, ketchup, pickles and a bun.

Watch the ad that accompanies the campaign: The fast food chain’s “real food” efforts included menu changes that involved the removal of around 8,500 tons of artificial ingredients globally.

Burger King’s Fernando Machado was one of three CMOs who spoke about what makes a brand bold at Brandweek on Tuesday, and in his talk he addressed this very brand purpose. He explained that the road to the Moldy Whopper was a long one—the result of years of paving the way with less risky campaigns that still pushed boundaries. Discover what he had to say, and learn more about boldness from Cadillac’s Melissa Grady and Celebrity Cruises’ Peter Giorgi.

What Led Dwyane Wade to His Post-NBA Gig at CAA, and More Revelations from Brandweek

Olympic gold medalist and three-time NBA champion Dwyane Wade has also made a name for himself as a savvy businessperson. At Brandweek Wednesday, he discussed how his experience as a brand sponsor and spokesperson prepared him to launch CAA AMP, which addresses the historical lack of diversity and inclusion in the sports media market. He enchanted attendees with stories about his career, inspiration and his work helping brands reevaluate representation today.

Catch the highlights: Read some of his best career anecdotes and advice for being a better marketer and leader.

Ryan Reynolds joins us at Brandweek today! If you missed the first days of Brandweek but you want to get in on the action, it’s not too late! Take 70% off the full ticket price with code 2DAYSBW to join two more days of inspiration, advice and experiences.

Bud Light’s latest series of ads share the stories of Black-owned restaurants that are hosting Thursday Night Football games. The campaign highlights the history and community these restaurants have fostered, providing publicity in a time when they have been disproportionately hit by the pandemic, not only economically but also in terms of the health of the Black community.

Watch these mini documentaries from different cities across the US.

After the Big Ten Conference said it would postpone college football  last month, it reversed the decision and announced that the season will resume the weekend of Oct. 23-14. That means a boost for fall TV inventory, plus a big boost for Fox Sports where the football games are broadcast. Marketers had shifted their spend to the NFL in light of the postponement.