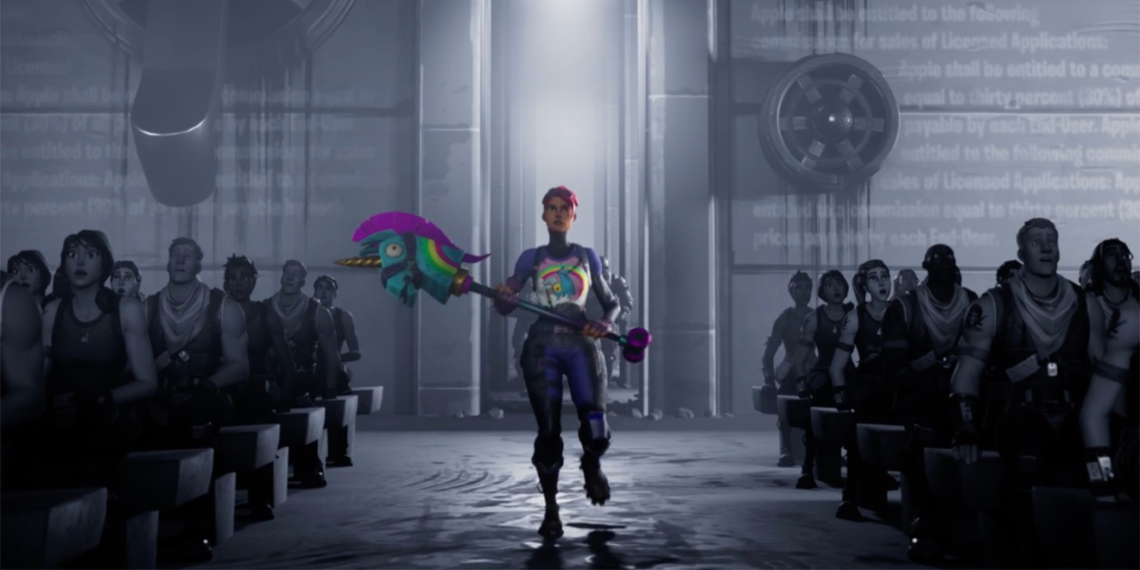 Epic Games casts itself as the hero in its battle with Apple. Epic Games

To call out Apple for taking 30% of in-app game purchases on iOS, Fortnite took the company’s iconic 1984 ad and created a fast-paced, shot-for-shot replica called “Nineteen Eighty-Fortnite”—casting Apple as Big Brother. It’s the latest jab in a public battle between Apple and Epic Games. Apple banned Epic from the App Store after the game maker directed players to pay it directly with in-game cash and items instead of through the app to prevent the tech giant from taking a cut. Epic is suing both Apple and Google, claiming the companies’ app store policies are anti-competitive.

Watch the video, and learn why Epic isn’t the only one Apple and Google are facing in the larger antitrust war.

Just over a month after Sleeping Giants co-founder Nandini Jammi announced her departure from the advertising activism organization over a dispute with co-founder Matt Rivitz, Jammi is taking a new step with Claire Atkin, who previously directed a b-to-b marketing agency in Vancouver. Their company, Check My Ads, aims to help brands understand how their ads reach the websites of bad faith publishers, inadvertently funding hate speech and disinformation, and what to do about it.

How it works: Check My Ads analyzes a given brand’s ad placement and blocked keywords and build out new strategies.

Gone are the days when brands shy away from partnerships with politically controversial public figures. Formerly, taking a stance on gender inequality, income disparity or even racial justice could limit a celebrity or influencer’s potential for brand partnerships—but in the age of authenticity, many brands see an opinion as an asset. On the flip side, many influencers want to partner with brands that are willing to share their values and views. But it’s not all sunshine and rainbows: Both sides of these partnerships involve a degree of risk, because either party’s image may be damaged if the other diverges from their publicly professed values.

Choose wisely: Adweek talked with experts about this trend, what’s fueling it and its inevitable complications.

Stadiums Across America Are Empty, So What Happens to Those Naming Rights Deals?

Companies slapping their names on stadiums is a storied tradition—but the pandemic has thrown a wrench in that story. Stadiums are empty now, leaving the worth of branding them in question. With every canceled game or event, that’s thousands fewer people to experience the event and associate the brand with it. While Amazon’s high-profile Climate Pledge Arena (future home of the Seattle Kraken) appears to be on track, New Era has withdrawn from its deal to brand the Buffalo Bills stadium, and Banc of California pulled its name from the MLS’ Los Angeles Football Club stadium.

Brands play on: Naming rights deals are still continuing, though the way they’re negotiated could spell a new future for the practice.

Retailers are bending over backward to make it look like they’re creating a safe, pandemic-free shopping environment—even if their efforts, like closing dressing rooms or letting clothes sit before returning them to the floor, don’t actually help. It’s being called “hygiene theater,” and it has the potential to backfire by damaging the customer experience.