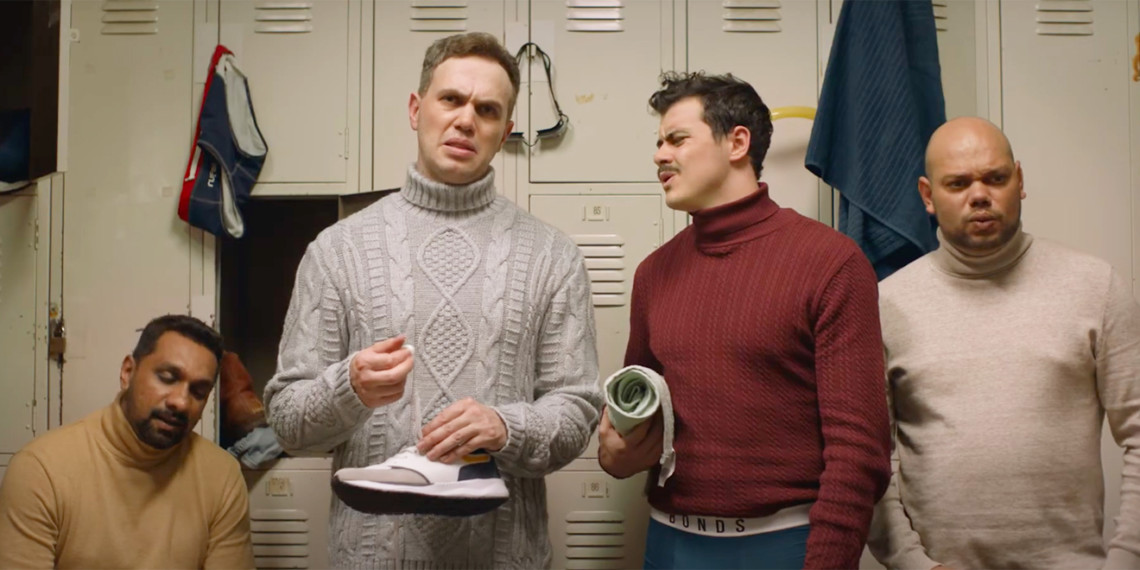 Men with turtlenecks—aka uncircumcised penises—chat with a man sporting a "crewneck." Clemenger BBDO

Let’s cut to the chase: This is an ad about circumcision.

Why is this spot for Australian underwear brand Bonds about circumcision? Ostensibly, it’s because their underwear is comfortable for men who were snipped after birth or who still keep it au naturel, though it’s unclear whether that’s actually ever been an issue when it comes to boxers and briefs.

More likely, the ad from agency Clemenger BBDO Melbourne is meant to highlight the social shift away from circumcision in nations such as Australia and the United States while still being supportive of men who underwent the procedure.

While it’s difficult to find reliable data on circumcision around the globe, the World Health Organization estimates about 30% of the world’s men are circumcised, with the majority of those being Muslim or Jewish. The practice is also common in many African nations.

Circumcision has also been historically popular among non-Muslim and non-Jewish residents of a few majority-white countries, including the United States (71% circumcised). Canada’s circumcision rate is about 32%, according to a 2016 study. By comparison, circumcision is quite rare in Western Europe, to the tune of 5% in both Sweden and Greece and less than 1% in Finland.

News reports in recent years have cited a decline in the popularity of non-religious circumcision, with many families just considering it unnecessary—though debates continue to rage across certain parts of the internet each day, with medical professionals saying either approach has benefits and risks.

The Bonds marketing team wanted to reflect this debate and cultural change through its (only mildly subtle) marketing.

“Approximately 20% of Australian men have crewnecks today, a big change from the 1950s, when roughly 80% of the male population had the ‘chop,'” said Richard Williams, executive creative director at Clemenger BBDO Melbourne. “Despite Team Crewneck being a rarer breed than Team Turtleneck, we know both teams have questions, and we hope this campaign gets all men talking more freely.”

The men’s underwear category generally follows tried and tested conventions, so we felt it was time to shake things up.

The brand also saw the seemingly out-of-left-field ad as a chance to shake up an industry that tends to use the same talking points—comfort and fit—across all its advertising.

“We are always looking for new ways to innovate. The men’s underwear category generally follows tried and tested conventions, so we felt it was time to shake things up,” said Kelly McBride, head of marketing at Bonds. “We are highlighting a truth that all men are aware of, but maybe haven’t given due consideration to when it comes to their choice of undies. We hope we’ll get on men’s radars with this cheeky message.”