Agency Calls Out PepsiCo President on Twitter, Challenging Him to Work With Small Shops

And he loves the idea 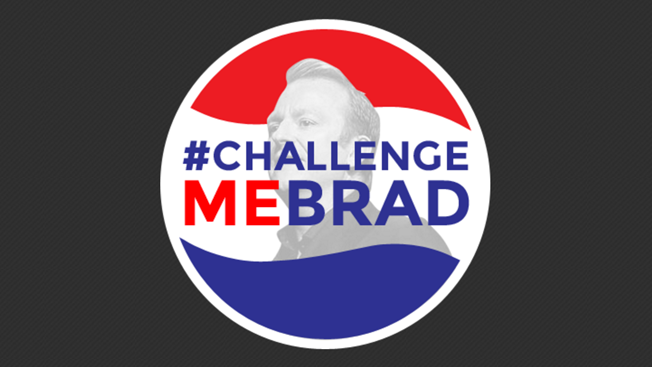 PepsiCo brand manager Brad Jakeman delivered a poignant speech at the ANA Masters of Marketing conference that had the industry buzzing in October. He criticized large agencies for focusing on 30-second TV commercials while shunning new technology, warning that "the agency model is not going to bend—it's going to break."

A small boutique agency in New York, HERO Group, believes it has the solution: big brands must hire small agencies to shake things up. And it's launching a campaign called "#ChallengeMeBrad" to give featherweights a fighting chance.

The challenge invites independent media, agencies or entertainment companies to visit the Challenge Me Brad website. There, an agency can upload its logo or photo, and the site will place a sticker on it (like the image below). Participants are encouraged to post their photos to Facebook, Twitter and Instagram using the campaign's hashtag. From there, Jakeman can search the hashtag to discover smaller shops on social media and hopefully start a conversation with those that interest him.

"I wanted to make this less about me and my desire to get an opportunity to work with Pepsi, and more about the systemic issues that face small agencies with great talent," said CEO Joseph Anthony, "who are more about passion and less about politics, less about selling what they're good at versus what the client actually needs." Beyond helping smaller shops garner a bit of attention, the campaign was also designed to call out PepsiCo for playing a part in the problem at hand.

"The corporate titans of the world are the biggest perpetuators of the status quo, which they are often far too quick to criticize. Rather than demean and scold the industry, they should foster creativity and incorporate small businesses into their marketing processes moving forward," Anthony wrote in a press release.

"It's very hard to ask brand managers to augment or validate new companies, especially when their jobs are on the line," Anthony added. "But aside from just sheer size, big agencies don't have a monopoly on good ideas."

The Challenge Me Brad website went up last week. After Anthony posted the site on his personal Facebook page and tagged a few PepsiCo friends, Jakeman—president, global beverages group—saw the campaign and praised it on Twitter and Facebook. He deemed it to be one of the greatest acts of passion he's seen for the industry recently.

This is totally epic! Love it. Most passion I've seen about the industry for quite some time. #challengemebrad https://t.co/6fzskYyb1l

Now that Jakeman has taken notice of the campaign, and is in regular communication with Hero Group's founder, Anthony said his agency plans to create additional campaigns targeted at big brands. The goal will remain the same—to help small businesses garner some recognition and have a chance to work with these big names.

"I put my chips on the side that this would be something he would appreciate, not necessarily reject. I sighed in relief knowing I didn't have to call my attorney or take the site down," Anthony said. "I think this demonstrated that good ideas can cut through the clutter and can be effective."