Ad of the Day: Proud New Yorkers (and a Few Other Familiar Faces) Tip Their Hats to Derek Jeter

Jordan Brand's round of respect for a retiring legend 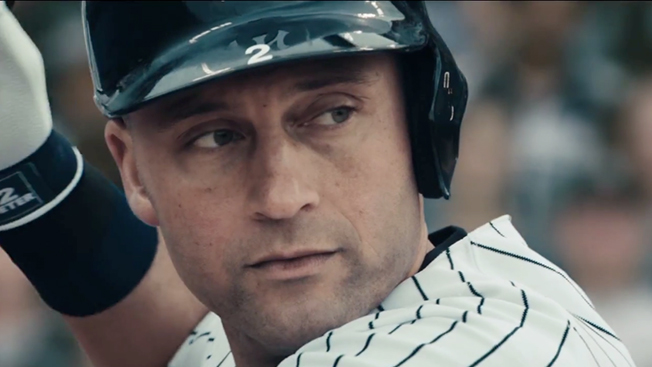 Respect. That’s what Derek Jeter of the New York Yankees is about. Everyone from Tiger Woods and Michael Jordan to Yankee haters tip their caps to Jeter in an epic 90-second commercial from Nike’s Jordan Brand that breaks during Fox’s broadcast of the MLB All-Star Game Tuesday night (7:30 pm ET).

Nike’s Jordan division gave Adweek an exclusive preview of the celebrity-filled spot saluting its longtime endorser, who’s retiring after the 2014 season. The classy Jeter is no Alex Rodriguez. The Yankees captain has always respected the game, teammates, opponents. The respect is returned big-time in the supersized spot created by Wieden + Kennedy in New York and directed by Matt Aselton of Arts & Sciences.

As the commercial opens, we see No. 2 digging into the batter’s box with his Jordan-branded cleats at Yankee Stadium. Red Sox pitcher Jon Lester tips his cap to Jeter. That small mark of respect spreads like wildfire.

At Yankee Stadium, everyone from ex-New York City Mayor Rudy Giuliani and movie director Spike Lee to fans in the stands and the NYPD begin tipping their caps.

Around the country, we see fellow Nike endorsers Woods and Carmelo Anthony of the New York Knicks doff their caps—along with rapper Jay-Z, comedian Billy Crystal, WNBA star Maya Moore and others.

In a nice touch, we even see a pair of die-hard Red Sox fans saluting Jeter as they watch him on TV. At the end, His Airness himself doffs his cap as we hear fans chanting Jeter’s name. Cut to an overview of Manhattan with the tagline, “RE2PECT,” and Jumpman logo.

Following Tuesday’s All-Star Game, the 90-second spot will air in its entirety during the ESPY Awards July 16. A shorter 60-second version of the spot will run across the Yankees’ YES Network, ESPN and other sports programming.

Jordan Brand marketers and W+K came up with the creative idea from Jeter’s own routine in the batter’s box. Along with his familiar raised right hand, Jeter tugs at his batting helmet as he faces the pitcher. What if Jeter saluted his opponent—and the world saluted back thought Nike marketers.

Jeter’s scheduled to play in his 14th and final Midsummer Classic at Target Field in Minneapolis on Tuesday night. The Jordan Brand spot will likely kick-start a host of Jeter marketing campaigns as corporate sponsors salute his career and try to position his post-baseball brand.

Fox’s MLB history is closely connected with Jeter. The network began showing MLB games in 1996, when Jeter earned the first of his five World Series rings. So look for Fox announcer Joe Buck to focus heavily on Jeter while he plays his final All-Star game.