Those returning to the office after over a year away may feel out of sorts and might even get homesick for their home offices. That’s why Score a Score, an agency that connects musical composers with directors and producers in need of original music, has come up with “Homesick Sounds,” an interactive soundboard with over 50 loop-able sounds workers can use to simulate the unique sonic landscape of their home offices at their regular offices.

The site lets people recreate the cocktail of sounds both near and distant, mixing an array of familiar aural stimuli so they can focus on work while still feeling at home. It starts with a selection of background music, from smooth jazz to lo-fi beats. Then listeners can add sounds that range from the comforting, like a coffee machine and crickets, to the highly annoying, like construction, fighting neighbors and “what’s that beep?” 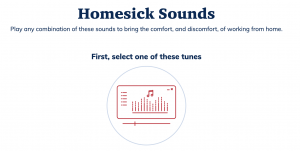 “As a music company we’re always looking to help our clients in ways that they never knew they needed,” Jordan Passman, founder and CEO of Score a Score, told Adweek. “We recognize Homesick Sounds as something that anyone going back to an office environment after a year-plus of working from home can truly appreciate. We want to showcase the power of sound, bring smiles to people’s faces and celebrate this exciting new transition.”

Passman said that to put the customized soundtrack together, the Score a Score team brainstormed as many work from home sound ideas as possible and then worked with a sound designer from its roster to bring them to life and a web designer and developer to execute the site.

Homesick Sounds even has a few secret sounds, triggered when certain combinations are played together—dogs chase cats, and when the kids fight that sleeping baby can prove to be a pretty light sleeper.

Score a Score previously came out with Presto, a button that when pushed by a client triggered a call, text or email from a member of the Score a Score team so they could get in touch right away.