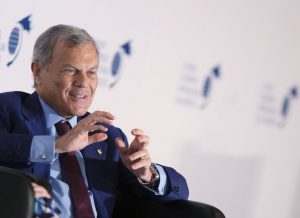 All hail the golden parachute.

You may have heard that WPP released its annual report for 2018 this week. It included lots of information about the company’s machinations including executive pay, and former CEO Martin Sorrell did pretty well last year despite resigning from the business he founded amid a cloud of controversy thanks to reports from The Wall Street Journal and The Financial Times.

As a refresher, the sources in those stories alleged WPP’s board investigated claims that Sorrell misused company funds for personal expenses including the services of a prostitute. The FT story also claimed that he mistreated staffers.

Officially speaking, Sorrell retired in “good leaver” status, and WPP never penalized him for any of the allegations as its internal investigation found nothing material (which does not necessarily mean that the reports were inaccurate).

That said, the fact that he made more money than any other WPP employee last year—including his successor, Mark Read—came as a surprise to many. And some of the company’s shareholders were less than pleased as 27% voted against the compensation committee report including executive pay.

This is not the first time investors have registered their displeasure. In 2017, Sorrell and others such as finance director Paul Richardson had their salaries slashed by more than 50%.

Here are the total 2018 compensation numbers for Read, Sorrell and Richardson from the corporate governance section of the report.

“Sir Martin Sorrell resigned on 14 April 2018,” the document read. “Under the terms of his employment agreements, he was treated as having retired. His share awards will be prorated in line with the plan rules and will vest over the next five years, to the extent Group performance targets are achieved.”

When combining base salary, pension and long-term incentives, Sorrell earned more than 3 million pounds, or approximately $4 million. Read’s total comes out to less than $3 million including the money he made as CEO/COO of WPP and chief executive at Wunderman.

“Martin earned more than Mark in 2018 because of Martin being awarded £2.522m from the 2014 EPSP [employee profit sharing plan] where he qualified for an 85% time apportioned share,” said a WPP spokesperson. “Mark’s remuneration as CEO since appointment in early September was £965k. He also received a short term incentive payment of £1.246m in respect of the first eight months of the year for his time as CEO of Wunderman and then as joint COO of WPP. Even when you add that £1.246m to his £965k he comes out at less than Martin. Mark has additionally been awarded in June 2018 a special one-off award of £1.5m, but that does not vest until 2019, 2020 and 2021 so should not be included in 2018.”

It’s worth noting that Sorrell remains one of the top 10 shareholders in WPP, and he has added to his shares over the past year. So he has a vested interest in the company despite regularly criticizing its leadership, their strategy moving forward and the way in which they handled his own departure.