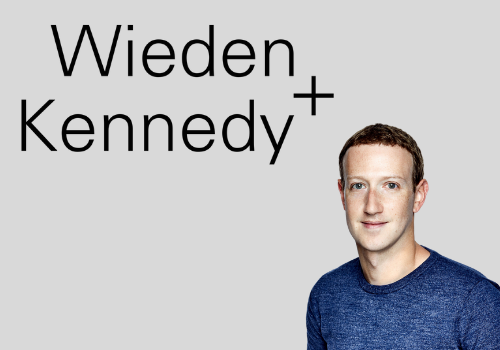 On June 17, Wieden + Kennedy released a statement not only in support of Black Lives Matter but also putting clients or potential clients on notice.

“If you do not support this sentiment as a client, we’ll gladly support you finding another agency,” W+K wrote in an animated post on Instagram.

The statement was bold, but the timing proved somewhat awkward. On the same day, six advocacy groups (including the NAACP and Anti-Defamation League) launched the #StopHateforProfit campaign urging advertisers to boycott Facebook—a major W+K client—in July.

That effort, aimed at getting Facebook to curb the spread of hate speech and misinformation on its platforms, has since snowballed into one of the industry’s largest boycotts ever.

Some of the world’s largest advertisers, including W+K clients Ford and Coca-Cola, have joined the effort, which comes after weeks of scrutiny over Facebook CEO Mark Zuckerberg‘s reluctance to fact-check political advertising or flag incendiary posts by President Donald Trump.

(For a relatively quick and easy refresher on how this boycott came together, you can check out Adweek’s newest bonus podcast episode with reporter Scott Nover, who’s been covering the story’s rapid development.)

Like most agencies, W+K has remained quiet on the boycott despite the movement’s clear traction with brands and equality advocates who normally find themselves marching alongside the outspoken agency.

But W+K isn’t like most agencies. It’s proudly independent (unlike the rest of the Facebook agency roster, including Accenture Interactive’s Droga5, Omnicom’s BBDO, Publicis’ Leo Burnett and WPP’s Ogilvy) and famously vocal on social issues—especially around race in America.

So, after saying it would drop clients who don’t support the “sentiment” of Black Lives Matter, will W+K stand by Facebook amid criticism of the network from much of the brand community and groups such as the NAACP?

“There is no debate on the fact that Black Lives Matter to us. We felt it was important as an agency to make that statement public,” W+K agency leadership wrote. “That said, speaking publicly about the challenges our client faces right now is not only unhelpful; it’s unprofessional. Suffice it to say, the intense conversations taking place at Menlo Park are taking place at Wieden + Kennedy.”

So there you go. Doesn’t sound like we can expect a high-profile client breakup any time soon, despite the agency’s tough talk on Instagram.