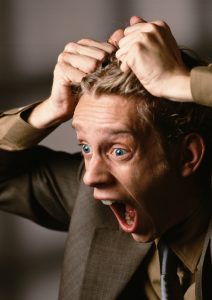 Time for us to find another stock image of someone tearing their hair out, because wow the client described in this Reddit post is a piece of work.

Yesterday, user MrGrieves787 wrote about it under “the client is not always right,” which should go without saying …

The man in question is “neckless marshmallow” Baseball Dad, the now-former leader of one of five different teams from this agency’s “biggest client.” He did pretty much everything the terrible client of yore has been known to do, from never approving work to blaming the agency for lagging sales and referring to them during angry calls as “vendors” (the horror!).

The very worst thing, however, was his blatant sexism as described in the post.

“He used to call my female co-workers ‘sweetheart’ in the most condescending voice, comment on their clothes/bodies, and wink/smirk at me while they were talking because we are both men, I guess,” wrote MrGrieves.

He also allegedly told a project manager, on a one-to-one call, that she should “worry less about budgets and more about wearing ‘that nice top’ she wore at our last presentation.” There is more.

We want to be surprised that people still behave this way, but we are anything but.

Anyway, the team had their revenge, according to the poster, by recording every call this guy was on to catch him at his best/worst. (This was apparently not a legal problem even though one must have two-way consent to record conversations in this unnamed state, because the guy was always late to his own meetings.)

Once they had a greatest hits reel, they sent it to the dude’s boss and “threatened to walk away from the work two weeks before product launch if [he] wasn’t disciplined.”

So his managers apologized and proceeded to fire him. Apparently he couldn’t quite handle it—and as icing on top, the project manager sent this cut to the man’s wife.

Please read the full post and send us more stories like this. Big h/t to Dan Goldgeier.