-Jack in the Box spokesclown Jack and singer Jason Derulo have teamed up for a series of spots promoting new products like a triple bacon combo, chicken fries and chocolate croissant bites. The short ads show a slightly hipper Jack than in ads past, and acknowledge that Jack can’t really eat his own concoctions with his big clown head and bristles at being told not to clown around.

The campaign, by David&Goliath, also features TikTok star Derulo curating some “Milli Meals” for a “One in a Milli” virtual restaurant with accompanying social videos.

-Omnicom’s Ro Kalonaros wrote about the history of LGBTQ+ marketing over the last 50 years.

–Wendy’s is expanding its partnership with Rick and Morty ahead of the Adult Swim series’ upcoming fifth season, rolling two show-themed drink mixes in the fast food chain’s Coca-Cola Freestyle machines, as well as a Morty’s pop-up restaurant in Los Angeles.

-DTC razor brand Billie has reimagined fairytales to support LGBTQ+ youth, illustrated by Sofie Birkin, that will release via Instagram throughout Pride Month.

-Kind Snacks will honor the LGBTQ+ community on June 23-24 with rainbow lights that reach the sky near the iconic Stonewall Inn in New York City, the birthplace of the Gay Rights movement. For those unable to attend the lights, Kind is inviting people across the country to join its support of the community by texting “Pride” to 1-833-623-KIND. For every text message received, Kind will donate $1 to its long-standing partner, the Ali Forney Center, a non-profit aiding homeless LGBTQ+ youth, in addition to a $50,000 donation being made to the organization. The brand will also issue its third-annual, special-edition Kind Pride Bar. 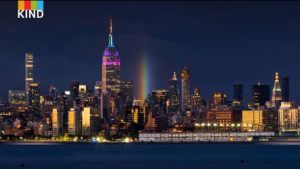 Kind Snacks will light up the NYC sky during Pride Month.