NEXT:Sid Lee US Hires 8 New Creatives
PREVIOUS:Webflow Ponders What Life Would Be Like if it Was Made by Web Designers

Cricket Wireless, which has a longstanding partnership with WWE, enlisted WWE star Kofi Kingston to promote its “Save Like a Superstar” campaign. A 30-second spot by creative agency Argonaut for the wireless carrier features Kingston and his quirk of never touching the floor when he leaves the ring. In the spot, a couple of Cricket’s amiably blobby characters spot Kingston backstage leaving the ring. They capture his antics of utilizing the rafters, rigging and a few other items to stay above floor on a mobile device, eventually helping him out with a few selectively placed pancakes before his eventual departure. Will it sell cell service? Not sure, but it is fun to watch.

-CPB has found a worthy replacement for Erik Sollenberg, after his departure from the agency last month. The MDC Partners agency has hired Marianne Malina as global CEO. She previously spent over two decades with Omnicom agency GSD&M, where she served as president.

-P&G is courting a younger and more diverse demographic by signing a multiyear advertising deal with Major League Soccer.

-The Gender Agenda, by creatives Jess Kielstra and Nina Forbes, set out to find out how young creatives are treated differently based on their genders.

-A trio of cascading raindrops takes the place of horses in a clever ad for horse racing event Royal Ascot in the U.K.

-Heineken’s “Cheers to All” ad took the top spot in Kantar’s most effective ads of 2020 study.

-Digiday found that workers in their 30s are relocating due to financial strain and the freedom of working remotely, which may redefine the national landscape.

–Bad Bunny was arguably the hottest artist of 2020 and Wunderman Thompson Colombia worked to promote a pair of pink sneakers the musician made with Adidas that came in an Easter egg. A limited number of pairs were put up for sale on the Adidas Puerto Rico online site, the birthplace of Bad Bunny, and they sold out in less than 10 minutes. 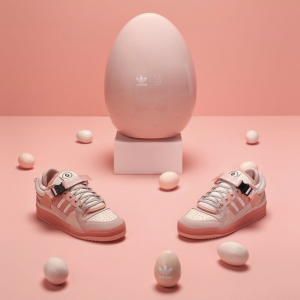 The Easter Egg shoes from Bad Bunny and Adidas.