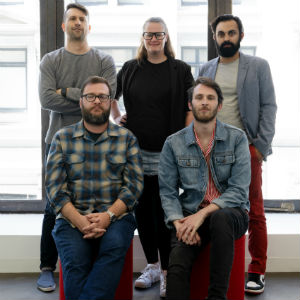 Venables Bell & Partners has brought on five new creatives to join its team in San Francisco.

This is the most recent move to shore up the department since ECD Tom Scharpf left for Leo Burnett last fall and several longtime creatives got promoted soon afterward.

Associate creative directors Grant Piper and Matthew Bottkol join the agency full-time after a period of freelancing and will primarily focus on the Audi account. They have freelanced together as a creative team since the beginning of 2018. After spending over two years as an art director with GS&P, working with clients including the NBA, Sprint, Corona Light, Modelo Especial, Doritos, Tostitos and Xfinity, Piper worked as a freelance senior art director for agencies including GS&P, Argonaut, DDB and barrettSF. More recently, he worked on Google Cloud’s 2019 March Madness campaign with Eleven, Inc. He worked on Volkswagen’s 2014 Super Bowl spot “Wings” while freelancing with Argonaut.

Before freelancing with VB&P, Bottkol spent a year as an associate creative director and copywriter with Argonaut. Prior to that he spent a year as a senior copywriter for Cossette and three years as an associate creative director and copywriter for GS&P, where he led the Sonic Drive-In account and also worked on Chevy Trucks, Cheetos, and Xfinity. Over the course of his career he has also worked with brands including Oreo, Planters, Chase Bank, Toyota, and the Minnesota Twins.

Another creative team, senior art director Sally Hastings and senior copywriter Scot van den Driesen join VB&P from Heat and will work across the agency’s client roster. At Heat, Hastings and van den Driesen managed Instagram’s first-ever global growth campaign and worked with brands including Facebook, Levi’s, Electronic Arts, Deloitte and THX, most recently serving as associate creative directors. Prior to joining Heat at the beginning of 2016, they spent seven years with Ogilvy & Mather in Australia, working with brands including AAMI, Goodyear, MINI, BMW and Puma. In 2015, Hastings was selected to Cannes Lions’ Cannes Lions’ See It Be It program, which helped prompt the move stateside the following year.

Copywriter Collin Smith joins the agency from Arnold’s Boston headquarters and will work primarily on the Marriott, Renaissance Hotels and Chipotle accounts. Smith spent the past three years at Arnold working with clients including Jack Daniel’s, Tribe Hummus, Carnival Cruise Lines, Huntington Bank and National Association of Realtors, and helped the agency win the Hardee’s account.

“We’ve had a great start to the year, tackling both interesting, creative challenges for existing clients as well as opening new doors with new brand partners,” VB&P Partner, executive creative director Will McGinness said in a statement. “We’re always on the lookout for outstanding new talent that’s pushing storytelling and innovation boundaries, and the right cultural fit for our team, too. Grant, Sally, Matthew, Scot, and Collin are all of those things, and we couldn’t be more excited to welcome them to VB&P.”