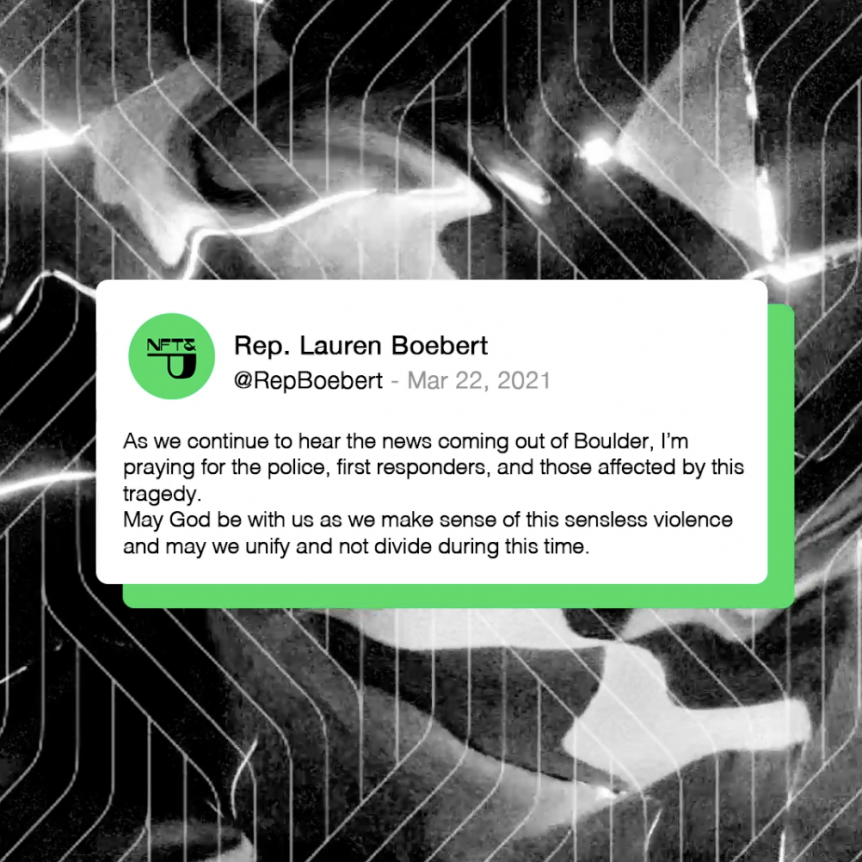 It seems nearly every day we see the news of another mass shooting—Atlanta, Boulder, Indianapolis—followed quickly by “thoughts and prayers” messages from elected officials, many of whom take money from the NRA.

Two new efforts by separate groups of creatives are taking on those who express sadness in public yet do nothing to help gun control or safety efforts, and both are using NFTs to raise money for organizations that works to end gun violence.

The campaign, “NFT&P—Non-Fungible Thoughts & Prayers,” auctions off NFTs of tweets that pro-gun politicians like Lauren Boebert, Ted Cruz and Jim Jordan have sent after mass shootings over the last few years. Money raised will be given to Moms Demand Action for Gun Sense in America.

The effort is the brainchild of agency copywriter Mohamed Chamsseddine Abdelhafidh, though it is not part of his agency work. In 2018 he had an idea to do something for gun control, and he wanted to include cryptocurrency. When he heard about NFTs he figured he could make his dream a reality.

“I had been wanting to work on gun safety and work with crypto… to turn something that some people see as worthless (NFTs) into real value and political action,” Abdelhafidh told AgencySpy.

He recruited three other agency and freelance cohorts: animator Jin Park, web designer Greg Skriloff, and art director Matthew So. They designed static images for all the tweets, after vetting that those politicians were against gun reform. Then they designed a website to house the tweets and their objectives, and went live on cryptocurrency platform Open Sea to put the now 23 tweets on auction. The site has been up less than a week so no auctions have been completed yet.

The group hopes to raise money for Moms Demand Action, an organization they picked because they saw how much groundwork it does for the cause. Abdelhafidh notes that they are not directly partnering with them but are willing to give the organization the crypto wallet if they want it.

Abdelhafidh cites NFT&P as an ongoing effort, but says that one day he hopes it won’t have to be used anymore.

“We really believe that one day, gun laws will change in the U.S. and, like most cases with other old political issues, NRA-funded politicians’ views will become obsolete,” said Abdelhafidh. “When that happens, these politicians will all scramble to delete their tweets and act like they’ve always been on the right side of gun reform. This project makes their current views, and cowardice really forever tied to the blockchain because the blockchain can’t be deleted.”

The group is selling ten unique NFTs and donating all the sales directly to Everytown for Gun Safety, an organization that is helping prevent future gun violence, with a goal is to raise $100,000. 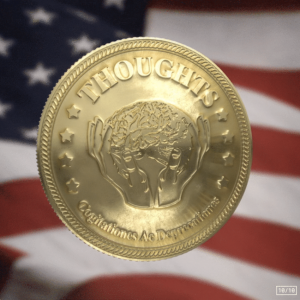 “NFTs are all the rage right now. Half the world thinks they’re completely useless, and the other half thinks they’re extremely valuable. Funny enough, the same can be said about ‘thoughts and prayers,” Joplin said in a statement.

A 2018 effort to call out “thoughts and prayers” messages saw a group of creatives launch a campaign assigning a “nothing” value to those hollow sentiments in the form of bills.