-The American Lung Association and the Ad Council have launched a new series of PSAs encouraging parents to proactively talk to their kids about the dangers and health effects of vaping. The new PSAs, created pro bono by advertising agency Hill Holliday, are part of a broader campaign to raise awareness about the risks associated with youth vaping—and help parents with kids aged 10-14 initiate important conversations with their kids to prevent them from starting. The spots show a teen and father trying to go viral with an anti-vaping video.

-Business publisher Axios announced that it had been acquired by the media conglomerate Cox Enterprises and Adweek looks at the five takeaways from the acquisition.

-Creatives are overworked, taught that coming up with their next idea is more important than staying mentally healthy, but some agencies are helping keep creatives inspired.

-Making audio content consumable for those who are deaf or hard of hearing is still not great—and Adweek looks at how the industry is addressing the situation.

-A new campaign from Oberland for the ACLU aims to demonstrate that “there’s more to trans than gender.”

-Today, fans can enter on social for the chance to win a Busch Light guitar signed by Jordan Davis. All they need to do is share their favorite memory that involves Busch Light and country music using the hashtags #BuschCountry and #Contest. The contest closes Aug 11. If budding beer guitarists want to make their own stringed concoction, they can learn how here. 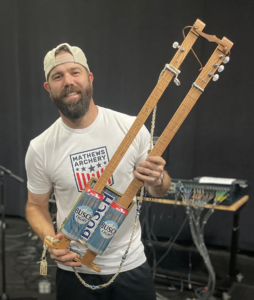