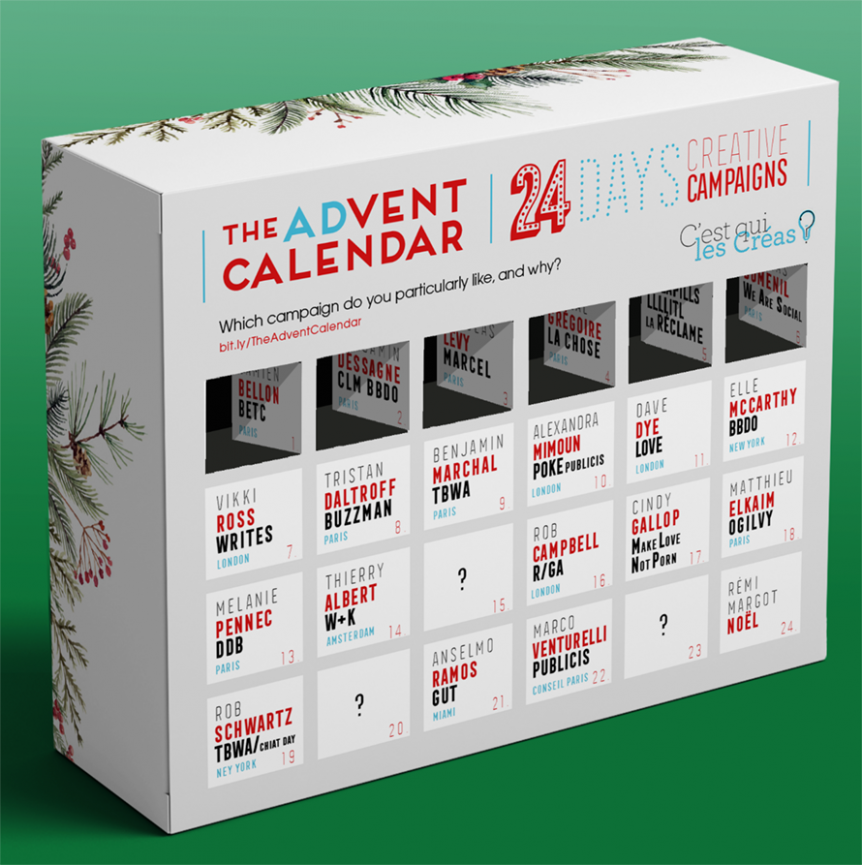 Ah, the Advent calendar. You open a little door, pop a chocolate into your mouth and then you’re on with your day. While the sugar buzz may satisfy for a moment, it’s not exactly memorable.

French creative freelancer Greg Ferembach, however, has created the advent calendar tailor-made for the creative and ad nerd on your list. The ADvent calendar is more than just a few ads plucked by Ferembach, who spent time at BETC, Y&R and Leg—and is the proud owner of the 8-year-old French creative blog C’es qui les Créas? Ferembach went far and wide, asking some of the world’s top creatives to weigh in on their favorite ads.

And this list does not disappoint. When you sign up for the calendar, you receive a new email (that you’ll actually want to read) outlining a favorite campaign. Americans might not be as familiar with some of the names on the list. Still, these are some influential folks in creativity like Benjamin Marchal (ecd at TBWA\Paris), Mélanie Pennec (cd at DDB Paris), Thierry Albert (cd at W+K Amsterdam) and freelance copy maven Vikki Ross. Cindy Gallop and Anselmo Ramos are also on tap later in the month.

Ferembach started thinking about the concept back in October and sees it not just as a way to celebrate creativity but to also serve as a history lesson of sorts for younger and new people in the industry, and a refresher for those who have been in the biz for a while.

“If you’re in your 20s, you might not know about these campaigns,” said Ferembach. “But, if you’re in your 40s, for example, you may have forgotten about them and it’s nice to remember some good work.”

Helpfully, Ferembach is keeping a running Twitter thread when a new door opens, and people can catch up on what they’ve missed so far from there, including clicking on the Mailchimp link to see why creatives have chosen the campaigns.

the ADvent calendar in online !
Concept : 24 Creative Directors explain why their favourite ad is their favourite ad.
Subcription : https://t.co/JcdgvgXort
(Check your SPAM)
I’ll post the links of the entries here to keep track
-> A thread to catch up pic.twitter.com/eabERGKYYh