Okay, we’re a little behind on this one.

COMvergence shared an overview highlighting the most significant moments for media agencies in 2019, which would have been much more timely last month. But between print deadlines, chasing tips, reporting on breaking news and, oh yeah, the Super Bowl, we fell a bit behind. So now it’s mid-February, but we still found this an interesting look back at the year behind us, so we’re going to spend a bit of time on it anyway.

COMvergence founder and CEO Olivier Gauthier characterized 2019 as “another busy and challenging year for media agencies,” explaining that of the $24 billion of global media spend monitored by COMvergence through media pitches, only around $6 billion (25%) remained with incumbent agencies.

“In terms of results, Carat and OMD have been the most successful global leading agencies in billings. Dentsu Aegis Network and GroupM (global leading group in billings) lead the new business ranking among the big 6 media agency groups. Also, GroupM and Mediabrands have announced several leadership changes,” Gauthier said.

Among the most significant global pitches of the year was Disney’s mammoth review, which mostly saw the entertainment monopoly split between Omnicom and Publicis Groupe, via the holding companies’ respective OMG23 and Publicis Imagine dedicated units. Novartis was the next largest global review, which concluded with the Swiss pharmaceutical giant consolidating its account with Publicis Groupe. Reviews for Pfizer, eBay and LG Electronics also were among the year’s most sizable global pitches.

P&G topped the list for multi-market reviews. That process ended with P&G consolidating much of its account with Carat early in the year while also taking a significant amount of work in-house. Other large multi-market reviews included Ferrero, Vodafone, Hyundai-Kia and Huawei.

In the U.S., the most substantial review of the year was pharmaceutical company Allergan, which sent its media account to GroupM’s Mindshare after initially selecting Publicis Groupe’s Spark Foundry. Other top reviews in the U.S. included the NFL sending its account to OMD without a review and NBC, which appointed Spark Foundry. 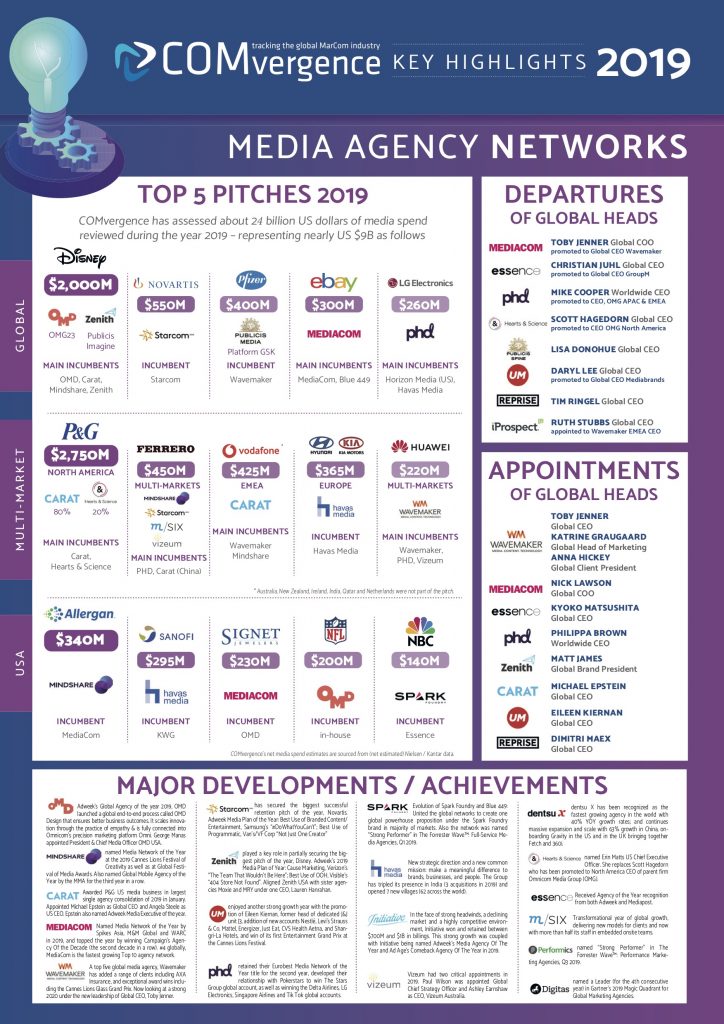 2019 also saw a good deal of M&A in the industry. The most notable of these, of course, was Publicis Groupe’s $4.4 billion acquisition of Epsilon, one of six additions for the holding company in 2019. Dentsu Aegis Network added a dozen of its own, and Martin Sorrell‘s S4 Capital went through a bit of a spending spree of its own.

Gauthier noted that the year’s 51 agency acquisitions represented a 40% decline from 2018.

“The largest deal was the Epsilon acquisition by Publicis, while Martin Sorrell’s digital marketing venture S4 Capital, is accelerating its development with 7 new acquisitions,” he said.