The current FIFA World Cup in Qatar has been rife with controversy, from the host country’s human rights violations and its abuses of migrant workers to FIFA’s alleged bribery and corruption scandal.

Agency Mojo Supermarket decided to stage a public protest in the form of projections onto FIFA’s office and the United Nations. For instance, thousands of passersby at Wembley Stadium in London saw a message projected onto FIFA’s office reading “FIFA – Proud Sponsors of The Slavery Cup.” 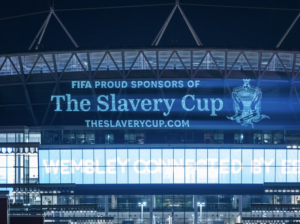 Wembley Stadium and the FIFA office are a target of The Slavery Cup project from Mojo Supermarket.

Simultaneously, projections also appeared on The United Nations building in New York and in the Shoreditch neighborhood of London calling out FIFA and the UN for allowing Qatar to use what many consider slavery to build its World Cup stadiums.

“The Slavery Cup” project also displayed and distributed thousands of passports across London and New York. In each passport are 11 names, faces and stories of migrant workers who died building the 2022 World Cup stadiums. 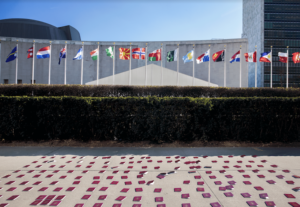 ‘The Slavery Cup’ placed passports with the names and stories of migrant workers killed building stadiums in Qatar.

The passports are symbolic of millions of migrant workers from Pakistan, India, Sri Lanka, Bangladesh and more who came to Qatar for construction jobs but had their passports confiscated and in turn, were enslaved to build the World Cup stadiums in harsh conditions. It is estimated that 15,000 of them died, some by their own hands.

The website theslaverycup.com serves as a central location for people to learn the stories of the migrant workers and donate to an organization of attorneys helping migrant workers still stuck in Qatar.

“We wanted to not only call out FIFA, Qatar and the United Nations for their responsibility and negligence, but make everyday football fans in London and New York see faces behind these statistics,” said Mo Said, founder and creative director of Mojo Supermarket in a statement. “Let’s face it, these are brown people that died. And a lot of western countries chalk these death tolls up to things that happen ‘in those countries.’”

Said continued that he is Pakistani but was born in Dubai to a Pakistani migrant worker in the Persian Gulf.

“Our family saw first-hand what this system does to people, their physical health and their mental health. The unfortunate reality is that this is going to continue on after the World Cup is over. But now, while the whole world is watching, we need to make sure they never forget,” said Said.

The Slavery Cup can also be followed on Instagram.