NEXT:This Junior Copywriter Is Trying to Create a List of Contact Info for Every Creative in the Country
PREVIOUS:BBDO Atlanta Goes Through Staffing Reductions as Agency Transfers AT&T Account to Los Angeles 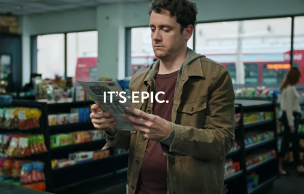 California’s state lottery system is officially seeking a general market vendor for “lead agency advertising services,” as per an RFP issued at the end of last week.

Independent El Segundo shop David&Goliath has been creative and media agency of record on the account since late 2010, when it beat out Omnicom’s Alcone Marketing Group and McCann’s since-shuttered L.A. office.

BBDO San Francisco had been the Lottery’s agency of choice since 2004 before being “eliminated early in the process.”

This most recent review comes about not due to any specific client demands but, rather, the fact that David&Goliath’s current contract expires on August 18, 2018. The Lottery group, which was founded in 1984 to help fund public schools without raising taxes, seeks one agency to handle both creative and media duties but will also “consider proposals from partnerships and joint ventures, for example, a creative advertising agency and a media agency.” (Shout out to Havas.)

The RFP does, however, note that “The Lottery’s goal is to become the largest lottery in the U.S.” It currently trails New York.

As with past reviews, the contract will last five years with up to two separate, one-year extensions issued at the client’s discretion.

Of course you’ve all seen RFPs before, but this one is pretty close to universal. It touches on tech “disrupting” the ad landscape, an increased need for ROI and planning services, and a greater alignment of creative, media and social. The client seeks “a strategically-based, highly creative Agency with best-in-class capabilities in media planning, buying, and analytics across all channels,” which is pretty much how every “full-service” organization describes itself. And yes, there’s a line about “think[ing] outside the box.”

Questions that agency reps must answer in the intent to bid round include “How should the Lottery communicate with and reach California’s diverse population through marketing and advertising efforts” and “How can the Lottery ensure that it continues to be relevant in the ever-changing consumer landscape and with new generations of California adults?” 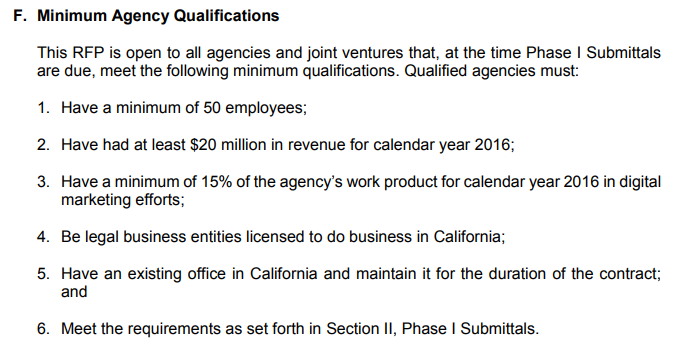 In 2010, Nielsen estimated that the Lottery spent approximately $35 million per year on its marketing efforts, and that pattern has largely held up. The latest numbers from Kantar Media have the group spending around $30 million in each of the last two years.

This means that the contract, with two extensions, could ultimately be worth more than $200 million. Agencies have to submit their answers and written questions by August 16.

“Since 2010, we have had the incredible opportunity to partner with the California Lottery to create some of the most impactful lottery work out there,” said D&G founder and chairman David Angelo. “We know this review is standard and we will definitely be participating. We cherish our relationship and look forward to continuing the momentum we’ve created together.”