Taco John’s, a Midwestern chain of quick-service Mexican restaurants that claims to have coined and copyrighted “Taco Tuesday,” has named Kansas City-based Barkley as its agency of record following a review launched earlier this year. 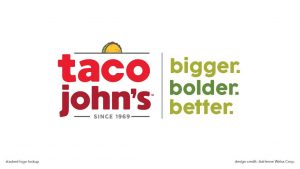 Under the designation, Barkley will handle brand strategy, integrated creative campaign development, digital and social strategy, and content and media strategy and planning. The agency will be tasked with amplifying Taco John’s new “Bigger. Bolder. Better” brand positioning and partnering with franchisees to improve the guest experience.

Barkley is expected to debut its first work for the brand in September.

“Taco John’s is an iconic brand with a fiercely loyal fan base,” Barkley chief growth officer Jason Parks said in a statement. “We’re excited to leverage our deep restaurant expertise and understanding of modern consumers to build on that and connect with new guests. Our research on modern consumers tells us that millennial parents’ use of quick-service Mexican food offers tremendous growth potential for the Taco John’s brand.”

Taco John’s is a 50-year-old brand based in Cheyenne, Wyo. It operates nearly 400 restaurants in 23 states.

According to Kantar, Taco John’s spent just more than $2 million on measured media in the U.S. in 2018.

“Barkley has a history of building long-term growth stories in the restaurant space and reinvigorating legacy brands by connecting emotionally with modern consumers,” said Alan Wright, Taco John’s vice president of marketing. “We’re excited to partner with Barkley and build a strong foundation for the next 50 years.”

So far, 2019 is shaping up to be a solid year for Barkley following additional recent wins such as Planet Fitness and Haribo, the candy maker of Goldbears gummy bears.