The world has stepped up to help the people of Ukraine, but much is still needed as the crisis keeps unfolding and millions of civilians are caught in the middle of the escalating military conflict.

As brands and individuals come up with different ways to support Ukrainians, the Ad Council is launching its own disaster and crisis relief effort that encourages audiences to give financial donations to the Ukraine Crisis Relief Fund through GlobalGiving.

The organization states that the best way to help those affected by a humanitarian crisis is by donating money rather than goods, as financial donations help support communities in crisis and in the immediate aftermath of a disaster.

“Our hearts are with the millions of civilians caught in the humanitarian crisis in Ukraine,” Ad Council president and CEO Lisa Sherman said in a statement. “With our platform and creative studio, we knew just how important it was that we act quickly to provide Americans with the right resources and information to support. I’m confident that the media community will support this critical effort.”

The effort is part of the Ad Council’s disaster and crisis relief campaign, one that has helped get funds to market quickly, when funds are needed most. It’s been used to raise money after disasters including the California wildfires, hurricanes Harvey, Maria, Irma, and Katrina and the earthquake in Nepal.

Campaign assets were created by the Ad Council Content Studio. 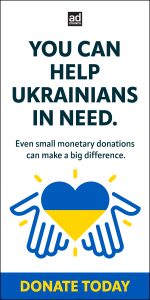