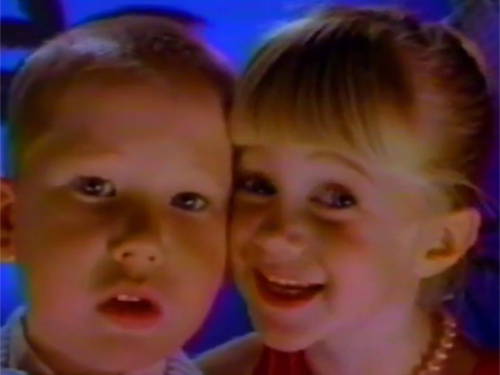 If you’ve perused the Adweek mothership today—and the beefy Super Bowl coverage—you may have seen a snazzy video from our lauded visual newsroom. In it, they asked reporters and editors to share their favorite Super Bowl ads of all-time (see the video here).

There was Amazon from Lucky Generals, a few from Weiden + Kennedy (Nike and Old Spice), that great Tide thing from Saatchi & Saatchi, Betty White for Snickers from BBDO New York and GoDaddy in the Deutsch years.

I panicked and said Puppymonkeybaby for Mountain Dew from BBDO New York, mainly because my son liked it so much.*

Then there was the answer from AgencySpy’s own Minda Smiley.

So, Minda, what was your favorite Super Bowl ad?

Since she’s from Pittsburgh, we all figured it was something from hometown brand Heinz or that Coca-Cola ad with Steelers legend Mean Joe Greene.

But, no. We didn’t expect this answer.

It turns out that Minda was IN A SUPER BOWL ad for Oscar Meyer in 1997! Cue the cute kid montage and, sure enough, there she is in the JWT-led spot singing Oscar Meyer jingles that you won’t be able to get out of your head now.

We get a little snippet of the backstory at the beginning of the video, and we’re sure that Minda’s parents can add a little more color to it when we eventually get around to asking them about how it all went down.

But here’s the thing. You may have worked on a Super Bowl ad, and that’s very cool. But we’re reasonably sure that Minda one-upped us all by actually being in a spot. Not many people can claim that.

*Editor’s note: This claim is highly dubious and should be met with a healthy amount of skepticism. Doug just really loves this ad.