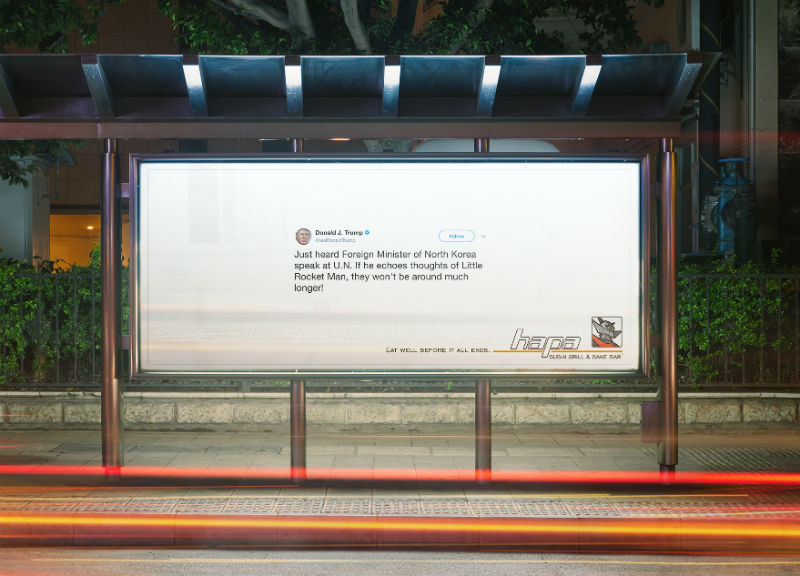 Earlier this month, TDA_Boulder launched a campaign for Colorado sushi chain Hapa Sushi playing on Trump-fueled fears of a nuclear apocalypse, entitled “Eat Well Before It All Ends.”

The ads featured actual (frightening) tweets from Trump, followed by the “Eat Well Before It All Ends” tagline.” It appears they did not sit well with everyone.

The Denver Post reported that the Downtown Denver Partnership raised concerns regarding the “political nature” of the ads, which appeared in seven kiosks along the 16th Street Mall and offered the opportunity to change the content.

“When the city respectfully asked us to edit the copy on the ads, we decided to pull them instead,” TDA_Boulder partner, executive creative director Jonathan Schoenberg explained in a statement. “The Hapa ads are engaging because they are unedited tweets from the President, and if we edited our tagline, the work wouldn’t make sense, or have the same effect.”

TDA_Boulder has made a habit of launching attention-grabbing and potentially controversial campaigns for the sushi chain. In 2014, the agency developed a pairing menu for cannabis strains and types of sushi, following Colorado’s legalization of recreational cannabis.