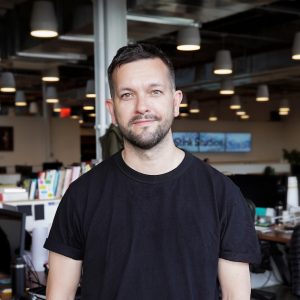 You’ve heard about the latest in-housing craze: every day, we see people across the agency/production world debate the pluses and minuses of working on only one brand.

So it’s very interesting to hear from someone who went the other way and came back. Mark Pytlik did just that. The co-founder of creative studio Stink Studios has returned to serve as CEO after spending just over a year as global creative director of Spotify’s in-house team. We spoke to him to learn more.

Music has been a unifying factor for Pytlik, who was a journalist focused on the music video business before heading to Stink in 2007.

“Spotify was one of our clients; we worked with them on big campaigns and had an existing relationship,” he said. “When I left Stink I wanted to do something completely different, and Spotify ticked every box: it was a large organization, I would work directly with products on an in-house team, and I would get closer to music (which is my first love).”

Of course you want to know what it’s like to work at Spotify’s in-house team, led by vp, global ECD and onetime Razorfish creative Alex Bodman. “I oversaw two workstreams: Artist Marketing and Creator Marketing,” said Pytlik. “Lots of the people who work on those projects also work across the Spotify brand, so there’s unity across the brand in terms of look and feel. But they also work with artists to promote their records on Spotify.”

That artist-driven work included OOH, social and content marketing, as well as some straight-up TV spots like this one promoting Cardi B’s then-new album as she went on Saturday Night Live.

SPOTIFY commercial!!! make sure ya check out INVASION OF PRIVACY on SPOTIFY pic.twitter.com/O2jaR0pCOb

“You got to touch a lot of different mediums and work across lots of budgetary ranges; there was tons of variety,” said Pytlik. “And it was super interesting because one of main stakeholders was always the artist, which made the brief more challenging. [You needed] something that was not only right for Spotify, but that the artists would get behind as well.”

There was also experiential work wherein a given artist would create events specifically for diehard fans—and if the business were big enough, the Spotify team would collaborate on more extensive projects like the site behind an interactive music video from Twenty One Pilots.

The team also worked on mini-documentaries about up-and-coming artists for Spotify’s RISE series.

So the obvious question: why go back?

Pytlik noted that he retained his partnership in Stink while working for Spotify (which remained a client).

“I was there for 10 years … when the opportunity came up, it seemed like a natural thing,” he said. “[And] in addition to Spotify, I talked to lots of agencies and production companies, got a better sense of what the market looks like now, and came away thinking Stink Studios is well-placed to capitalize on changes happening in advertising.”

Specifically: “Smaller and medium-sized companies are building on smaller, more efficient work that is rooted in production.” For Stink, that can mean everything from Nike and Google to luggage brand Tumi or Dutch cloud service WeTransfer.

When asked whether creative agencies will be pitching against Stink Studios in the near future, he said, “I think they already are.”