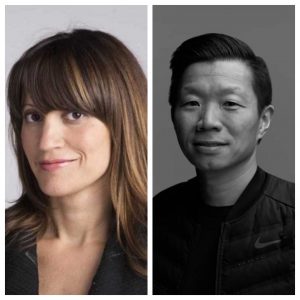 It’s a new day at R/GA in the U.S. as president Sean Lyons announced, via all-staff memo, that the agency has hired Tiffany Rolfe (formerly partner and CCO at Co:Collective) and promoted evp, global chief design officer Richard Ting to the roles of co-CCO.

They replace Chloe Gottlieb and Taras Wayner, who also co-led creative before she accepted the head of UX position at Google and he went to Saatchi & Saatchi earlier this year.

We’re told that the consultative nature of Co:Collective’s work, which squares with R/GA’s model and the plans of its founder and chairman Bob Greenberg, played a role in Rolfe’s hire. The agency’s global chief talent officer Angie Hannam was also her longtime colleague at CP+B.

“It’s called Co:Collective because it’s about being collaborative with clients,” Rolfe told us. “R/GA is a rare example where they managed to build many capabilities under one roof. If you pay people to build one certain thing, you end up bringing the same thing over and over.”

“R/GA is one of the only places I can think of that can distill and make [like] that,” she added, calling it “a crazy treasure chest of capabilities.”

Here’s the email from Lyons, which is fairly (refreshingly?) straightforward.

I want to share some great news with you this morning!

We are very excited to welcome Tiffany Rolfe to R/GA as our new US Chief Creative Officer. Tiffany is well known for her consultative creative approach and brings with her over 20 years of design and creative experience from her decade-long tenure at CP+B where she was VP, Executive Creative Director, and six years at Co:collective as Partner and Chief Creative Officer. Her work for clients like PepsiCo, Google, American Express, Old Navy, Microsoft, Under Amour, YouTube, Puma, and the ACLU has earned awards at every major creative and effectiveness competition including Best of Show at One Show, Grand Prix and Titanium Lions at Cannes, and a Grand Clio.

As our new US CCO Tiffany will be responsible for creating and championing a creative vision for R/GA in the US, curating and nurturing creative talent, and driving transformational creative work that delivers business impact for clients. Her creative partner in all of this will be Rich Ting, who will also serve as a US Chief Creative Officer. Together they will draw on their complementary expertise to manage the creative leadership and drive the work across all creative disciplines in R/GA’s six US offices.

Tiffany will be based in NY and starts in early December. I am thrilled to have Tiff join our team and can’t wait for you to meet and work with her. I know I can count on all of you to support her as she begins the next chapter of her career at R/GA!