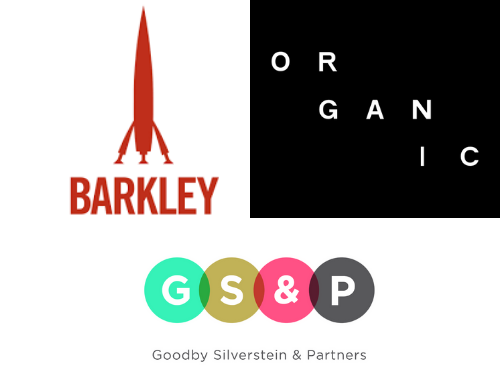 Last week was a busy one in the ad industry, including hires we didn’t around to covering at Barkley and Organic and a pair of promotions at GS&P.

Miller will be responsible for recruitment and overseeing diversity, equity and belonging across the agency.

“Recruitment is more than just offering a referral program. Attracting a diverse population of talent starts with creating a space for people to bring their authentic selves to work every day,” Miller said in a statement. “At Barkley, we will be reverse engineering the model of recruitment, retention, and culture.”

A Kansas State University grad and Fulbright Scholar, Miller arrives at Barkley from the world of education. He was previously a postsecondary coach at Kauffman Scholars and director of the Green Fellowship program at Teach for America, a position he instrumental in elevating to the national level. Also active in the Kansas City community, Kansas City community, Miller promotes diversity through The BrandLab and as a board member of Big Brothers Big Sisters. He’s also co-owner of The AV Collection, a virtual winery which utilizes winemaking to give back to the community through various charities and drives inclusion in the winemaking industry.

“By embracing everything that makes our partners who they are and what makes them unique to the world around them, we create the conditions and capacity to help creative, original thinking thrive,” Barkley CEO Jeff King said in a statement. “As an agency, we believe that equity and belonging are essential to the changes we want to make and the agency culture that we want to foster, and we believe that Adam is the person to help us make those changes.”

Organic, part of the Omnicom Precision Marketing Group, also invested in supporting its DEI efforts with a new hire.

The agency hired Danielle Sherman as director of people and culture. Sherman will focus on the agency’s employee experience, acting as an employee advocate to ensure Organic employees feel represented and empowered, while bolstering the agency’s existing emotional intelligence-based training. She will serve as part of Organic’’ female-led leadership team, reporting directly to CEO Cathy Butler.

“Danielle brings a wealth of experience where it matters most – the intersection of our employee experience, DE&I and agency culture,” Butler said in a statement. “She embodies all of our core values – relentless, curious, optimistic and kind – and I can’t wait to see how she continues to shape Organic into an agency we are all proud to call ours.”

Sherman joins Organic with over a decade of experience, most recently climbing the ranks at Barbarian from manager of HR and talent to director of people and culture. While at Barbarian, she helped lead the agency to 3%-certification and increase representation to include nearly 50% of employees from diverse backgrounds.

“Being a part of a company that truly leads from the lens of the employee experience and leans into culture, is devoted to diversity, equity and inclusion and the wellness space is like striking gold for any People leader. In my new role, I am excited to build upon the incredible foundation that Cathy and the leadership team at Organic have cultivated over the last 18 months,” Sherman said in a statement. “Looking into the future, as COVID follows us into the new year, organizations that focus on supporting their employees during these challenging times is a clear differentiator in the industry. Our goal is to make sure that Organic is the gold standard.”

Baynham and Wittmark previously served as associate creative directors. Some of their recent work includes a “Life Below Water” underwater film about ocean plastics for Google, Tribeca Enterprises, United Nations and YouTube, narrated by Morgan Freeman. They also worked on a cyberbullying PSA campaign for the Ad Council which featured the first emoji tied to a social cause, according to a statement. In some ways their most difficult challenge may have been for a a PSA campaign for Common Sense Media’s “#DeviceFreeDinner” initiative which had to make both Jeff Goodby and Will Ferrell laugh.

Their passion for comedy and altruism came together a few years ago in the form of a series of public-service announcements for media think tank Common Sense Media’s #DeviceFreeDinner initiative. In perhaps their most difficult writing challenge to date, they had to create a series of scripts that made not only Jeff Goodby but also Will Ferrell laugh. The PSAs were praised in publications such as Esquire; featured on TODAY, the popular morning talk show; and went “Immortal” on Funny or Die.

“If you put Atlanta and Stockholm in a blender, you’d get their essence: a little dark, extremely irreverent and fearless, with this Scandinavian/Southern work ethic that makes for an unstoppable combination. Even though they’re from two very different parts of the world, they totally get each other,” GS&P CCO Margaret Johnson said in a statement. “Their work transcends media. From creating the first emoji for a social cause to getting people to put down their mobile devices at the dinner table, their work is always rooted in humanity.”