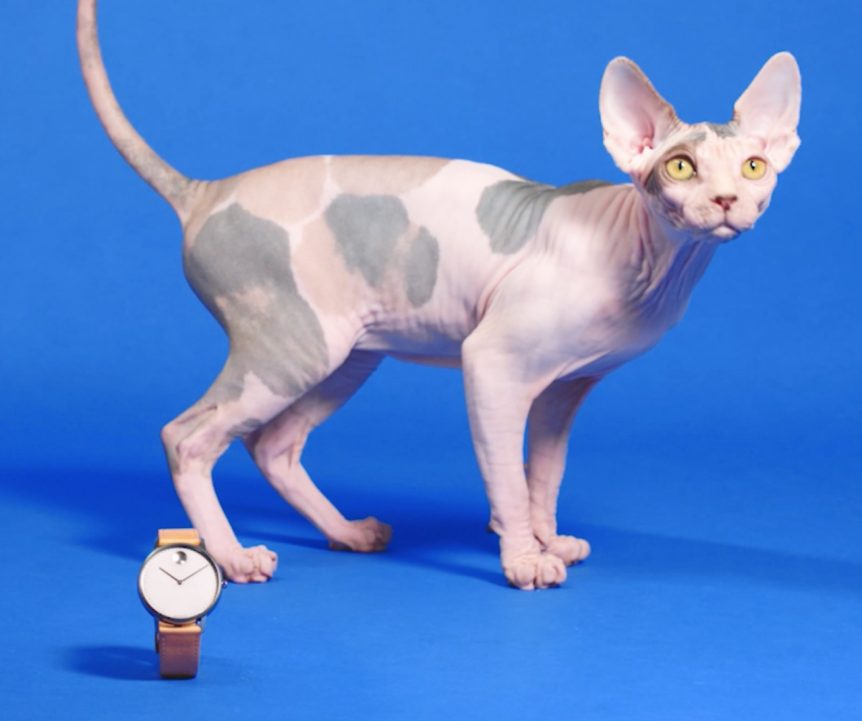 The Bauhaus design movement, which started in 1919, has its roots in simplicity. This modernist movement which began in Germany placed a significant premium on uniting art and functional design—and watch brand Movado embraced its ethos with its Museum Watch in 1947. Designed by American artist Nathan George Horwitt, the simple black watch was defined by a single gold dot at 12 o’clock.

“We do not know time as a number sequence, but by the position of the sun as the earth rotates,” he said.

Taking a page from the brand’s history, Red Antler worked with Movado on a new direct-to-consumer (DTC) social campaign for its new Movado Face collection. There are ample minimalist cues from Bauhaus, yet the Brooklyn agency moved from lofty meditations on design and gave the concept a playful social lift using hairless cats, snails, turtles, pretty birds and loaves of bread to target a younger audience.

“We rooted all of the work in Bauhaus principles, which dictate that form follows function,” said Lindsay Brillson, Creative Director, Red Antler. “We asked ourselves, what is the absolute least we can say and show—and still get the idea across? Hence, headlines like ‘tells time,’ and pedestals made of cardboard and sponge. Or, you know, a hairless cat. A hairless cat is basically the definition of exactly what’s needed and nothing more.”

Overall, the work is stark and arresting—but in a good way—pokes a few lighthearted jabs at the “buy now” verbiage common in DTC advertising and has a similar, simplicity-driven vibe of Wieden + Kennedy’s “No B.S.” campaign for RXBar.

Additionally, there’s not too much going on in the creative (especially the six-second videos) which, of course, ties back to the overall concept of simplicity and is a welcome respite from brands trying to cram everything they can in a small window of time.

The creative is running as pre-roll in digital and social assets are on Instagram.