PBS Kids has been on the air for nearly three decades, and in that time it has helped educate and entertain a generation of children. Now, the channel is celebrating its teaching and learning with a new integrated campaign.

Independent Santa Monica-based agency RPA worked with PBS Kids on “You Taught Me,” a campaign celebrating how much we teach our kids as well as how much we learn from them. Social videos exalt in aspects of learning, like slowing down, finding joy in everyday moments and the fun of making up the words to silly songs.

Director Rafaela Carvalho captured real families from across the country in a mix of tender, funny and joyful moments. RPA worked with production company Jojx and an array of cinematographers and their real families as the talent in the spot. Camera feeds via QTake and Zoom were used in the families’ houses, backyards and neighborhoods for the moments that became the final product.

In the videos, we see a child skipping along with a parent, with alternating lines of what the parent has taught and what the child has learned, then flipping it to what the child has taught the parent in the learning process. It ends with the tag, “The world is full of possibilities and so are you.” The tag carries over to the static banners, which feature the line along with pictures of kids smiling and playing. 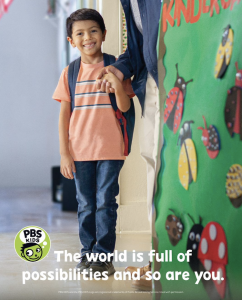