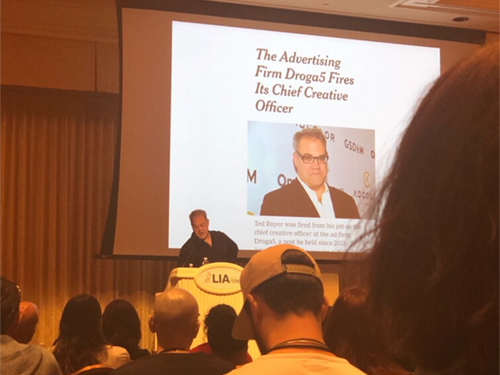 At a London International Awards (LIA) session for young creatives, Ted Royer, the former CCO of Droga5, was a surprise guest. His inclusion during the LIAisons was, according to posts on Twitter and Fishbowl, met with disbelief.

Per the LIA site, Royer was not listed among several creative leaders, including Ogilvy global CCO, Piyush Pandey, Prettybird co-founder and president Kerstin Emhoff and Mark Tutssel, who recently retired from his role as Leo Burnett’s executive chairman.

LIAisons is an annual program, held by LIA, that gives 100 young creatives between the ages of 21 and 30 a chance to meet and learn from, according to the site, “the creatives they look up to most in the industry.” LIAisons run concurrently with LIA judging in Las Vegas, and airfare and accommodation are provided by the festival.

At issue, according to accounts on social media, was the appropriateness of having Royer, who was fired by Droga5, as a speaker. 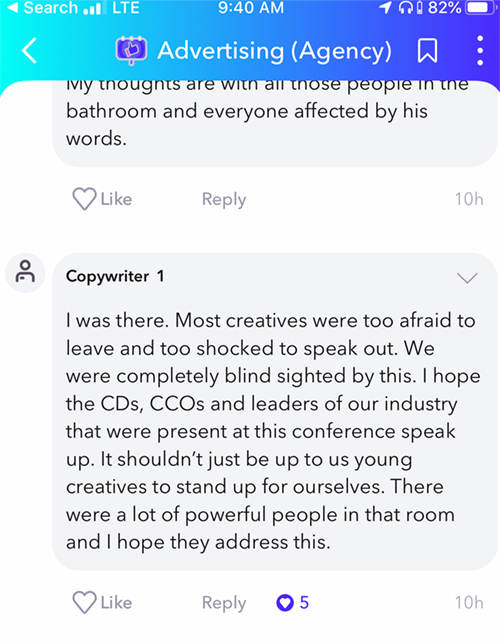 One post on Fishbowl noted that attendees were “crying and shaking in the bathroom” and that LIA implied that if people missed any session that they “wouldn’t be reimbursed.” 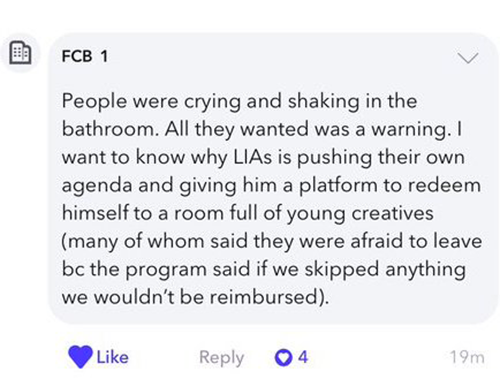 LIA and attendees have not responded to requests for comment on Royer’s inclusion in the program. We will update the story upon any response.

Royer was dismissed from the agency in Feb. 2018. While the cause of the dismissal was not revealed, a representative at the agency said, at the time, that “We are committed to maintaining a safe and inclusive environment for all our employees. We are unable to comment further on personnel matters.” CEO Sarah Thompson also added in an email that Droga5 hired “an independent firm … to assist us with our investigation” when Royer was on leave and encouraged staff members to come forward with “any concerns or complaints.”

Later in the year, it was reported that Royer was hired to help assist DDB for the Omnicom network’s pitch for the global Volkswagen account (ultimately divvied up among WPP in North America, Omnicom in Europe and South America, and Cheil in China). Initially, DDB’s global CEO, Wendy Clark, denied that Royer was hired for the pitch yet, shortly thereafter, stepped down from the Time’s Up Advertising steering committee, acknowledging that she made a “mistake.”

At that time, the committee issued a statement reading, in part, that: “Our mission is to create workplaces that are safe, fair, and dignified for all. Our signatories are accountable to the values of the mission. We hold the women who signed, and their agencies, accountable for a process of change.”