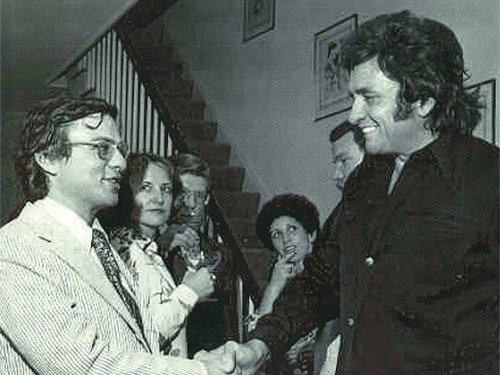 There was a time, a time before cable, when the local anchorman reigned supreme. When people believed everything they heard on TV. This was an age when only men were allowed to read the news. And in San Diego, one anchorman was more man than the rest.

Oh, wait … sorry. We’re getting our old school references mixed up (credit: Anchorman, Adam McKay, et al.). But, there was a time when Adweek had six regional publications and dinked around with other geographic editions. From 1987 to 1990, Stewart Alter was the editor of those various dalliances with a more local/regional flair.

Alter, in 1990, then moseyed his way to McCann to become director of corporate communications (when it was called McCann Erickson Worldwide). After his stint as the agency gatekeeper, he ambled through McCann Worldgroup as evp of corporate strategy and communications, director of employee learning and, finally, editorial director.

The agency today announced that Alter is retiring at the end of the month.

But let’s go back to his publishing career for a moment (and acknowledge this sweet, pixelated 1975 photo of him interviewing Johnny Cash). Alter was a reporter with Advertising News of New York (ANNY), the predecessor to Adweek. He also logged stints as associate editor of Parents magazine, managing/executive editor of Magazine Age and senior reporter/senior editor at (cough, cough) A* A*e before he landed in the hallowed halls of the Adweek mothership.

Being AgencySpy, we tried to dig up some “insight” on his tenure, but we came up with nothing. Undaunted, we then asked about the Michael Wolff years at Adweek and were met with a resounding chorus of “no comment,” even when we inquired about his eyewear.

But we digress. You can see McCann CEO Harris Diamond‘s effusive aloha below.

A hearty hat tip to Alter, and we wish him a bon voyage on the S.S. See Ya Later, Advertising.

One of our favorite colleagues, Stewart Alter, is retiring at the end of this month.

As most of you know, Stewart has been in our business for all of his career, first covering us, then as one of us. From his days as a reporter with ANNY (Advertising News of NY), the feisty predecessor to Adweek, to top positions as Editor of Magazine Age, Senior Editor of Ad Age, and finally, as Editor of Adweek, he earned a reputation as one of our industry’s best and most respected journalists.

The impact and intelligence of his thinking and writing has helped drive our global reputation as we expanded from a top global advertising agency to a leading multidisciplinary marketing communications company. His belief in the importance of truth has helped define our cultural platform; in his spare time, Stewart quietly became McCann’s unofficial Historian.

A few examples of the latter: He authored TRUTH WELL TOLD, McCann Erickson and the Pioneering of Global Marketing, published in 1994, a 300+page hardcover book—incidentally, still available (used) for $48.93 on Amazon; 100 Years of Creating Demand, celebrating McCann’s 100th Anniversary, in 1992; and Expanding Our Charter, marking the 10th Anniversary of McCann Worldgroup in 2007. He also has authored regional and discipline histories, histories of client collaboration, a series of McCann Time Capsules for our Truth Well Brewed blog and is the uncredited contributor to, and corrector of, our Wikipedia page. No one knows us better than Stewart.

By any measure, his career has been stellar, but perhaps what is truly rare and special is that in addition to being one of our industry’s and our company’s all-time smartest contributors, he is one of the nicest. As literally thousands of us know, he is gracious, generous, honorable, and funny.

A familiar business trope is that no one is irreplaceable. Stewart might be.

Please join us in saluting and thanking Stewart for all that he has done for us and wishing him and Daisy a very happy and satisfying next chapter, filled with family—including three grandchildren, the newest just 2 months old—friends and new adventures.

We will miss you, Stewart. Thank you.