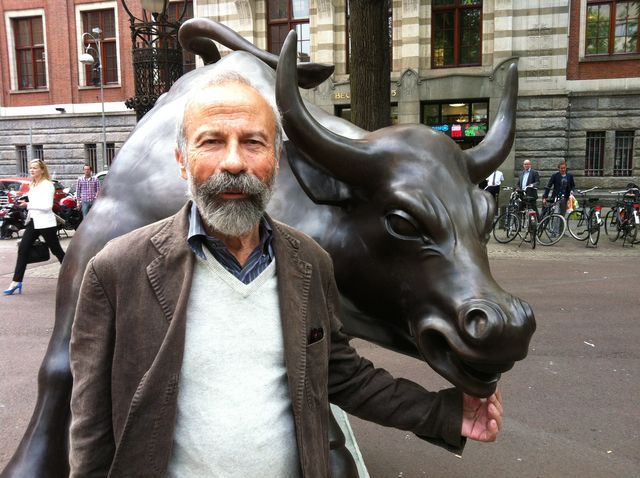 Artists: they’re just like us! Today, the Italian sculptor behind “Charging Bull” is absolutely furious with the City of New York for allowing a little girl to stand in the way of the statue that he installed 30 years ago … illegally and without permission.

Lawyers representing Sicily-born Arturo Di Modica claim the city has “infringed on his own artistic copyright by changing the creative dynamic to include the other bold presence,” according to a report in The Guardian last night.

He wants the city to remove McCann’s “Fearless Girl” immediately, or else he will be SO MAD, YOU GUYS.

OK, but let’s rewind a bit. Back in March, Marketwatch ran a story under the HL “Wall Street Bull artist calls BS on ‘Fearless Girl’ statue.” In the interview, Di Modica called the classification of the work as a symbol of female empowerment “a mistake” and said, “That is not a symbol! That’s an advertising trick. My bull is a symbol for America. My bull is a symbol of prosperity and for strength.”

Hmm…so what was his project, again?

Di Modica spent $350,000 of his own money to create and install the bull in 1989, after the stock market crashed, as a way to express his confidence in American capitalism. He called it a Christmas gift to the people of New York—but the NYPD wasn’t so amused, because Di Modica had no permission to install it … so they impounded the sculpture and held it before reinstalling it a couple of blocks away due to public outrage.

Oh, also: the city does not own the bull, and its position is officially temporary … just like that of “Fearless Girl.” Di Modica does have a copyright, however, and he will sue your ass without blinking if you try to use it to make money. He already sued Walmart for using photos of the sculpture and took Random House to court over a book about Lehman Brothers that featured a cover image of the bull. While he initially planned a series of four or five bulls for different cities, he has to date installed only one other, very similar sculpture in Shanghai.

Before you ask: yes, everyone likes to play with the balls. It’s not just you. Here’s a fun quote from a 2007 piece on tourists’ fascination with the work:

“I’ve seen people do some crazy things to that bull,” souvenir vendor David Jefferson said, shaking his head. “At night sometimes, when people have been drinking, I’ve seen them do stuff to that bull that you couldn’t print in a newspaper.”

Di Modica plans to hold a press conference on the topic today, so we will need to update this post. No comment from McCann, which is understandably avoiding this one like Sean Spicer will avoid any mention of World War II for the next few weeks.

The results of this Marketwatch poll are also a little surprising. 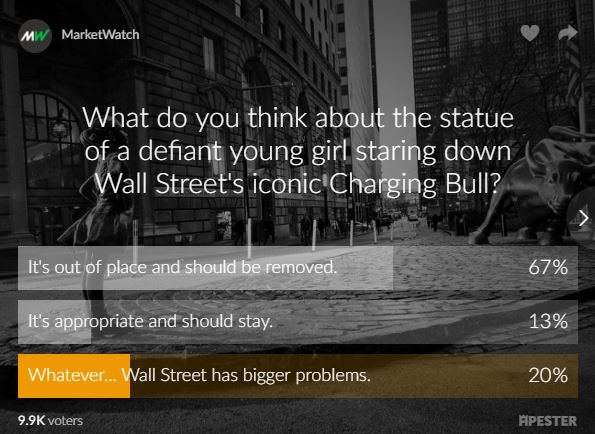 Are these finance bros saying that Wall Street doesn’t have bigger problems?

And do you still wish you’d gone into fine art instead of advertising?