NEXT:Here's What Happened at Argonaut This Week
PREVIOUS:Periscope Cut 3% of Staff in Layoffs Last Week

Amid its ongoing two-year-plus restructuring, WPP’s Ogilvy has ceased creative operations at its Atlanta office and laid off a number of its creative employees in the Georgia hub, according to sources close to the business.

An Ogilvy spokesperson declined to comment directly on the layoffs, making it unclear how many people lost their jobs.

The representative described the move in an email to AgencySpy as a reduction in size, saying the office is now dedicated to client service, “retaining several of our core capabilities including (but not limited to) PR and influence, production and customer engagement and commerce.”

“Last year, we made some changes to our Atlanta office to respond to changing client needs,” the spokesperson said. “We continue to maintain a presence in Atlanta and are continuing to work with clients across our core capabilities.”

It is unclear exactly when these changes occurred, but several Glassdoor reviews seem to suggest that they began in December 2018, after the larger Ogilvy network unveiled its major rebranding effort in June. 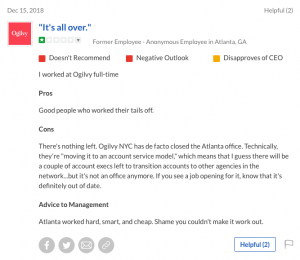 One review posted on Dec. 15 by a former full-time employee reads “It’s all over.”

“There’s nothing left,” the person wrote. “Ogilvy NYC has de facto closed the Atlanta office. Technically, they’re ‘moving into an account service model,’ which means that I guess there will be a couple of account execs left to transition accounts to other agencies in the network … but it’s not an office anymore. If you see a job opening for it, know that it’s definitely out of date.”

Another review posted on the same day, titled “Empty Promises,” by a former full-time employee, who said they spent two years with the agency, accuses management of not being transparent with the Atlanta team about their ultimate plans for the office. 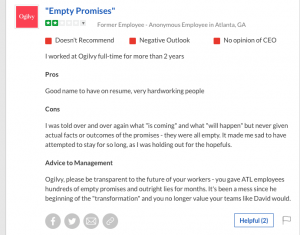 “I was told over and over again what ‘is coming’ and what ‘will happen’ but never given actual facts or outcomes of the promises—they were all empty,” the person wrote. “It made me sad to have attempted to stay for so long, as I was holding out for the hopefuls.”

The person continued, “Ogilvy, please be transparent to the future of your workers [sic]—you gave ATL employees hundreds of empty promises and outright lies for months. It’s been a mess since [the] beginning of the ‘transformation.'”

Ogilvy Atlanta posted a picture of the team to Twitter on the same day that the larger network unveiled the June “re-founding” that saw a new brand positioning, “Makes Brands Matter,” along with a fresh logo, color scheme, website, organizational design, consultancy practice, digital platform and employee video.

Last month, Ogilvy announced the latest development in its restructuring with CEO John Seifert revealing a series of promotions and departures as he finalized the makeup of his new leadership team. Notable departures included Gunther Schumacher, who led the “delivery” division, and Stuart Smith, who headed up public relations. Schumacher was with Ogilvy for 23 years and is now chief revenue officer of Washington, D.C., law firm Venable LLP.