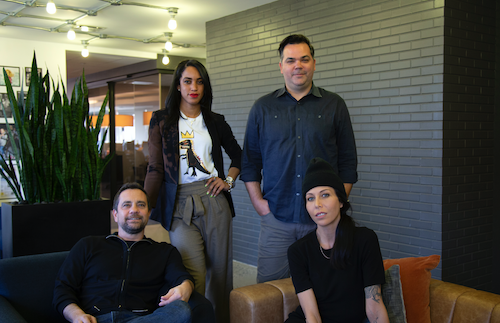 McCann expanded its executive creative leadership team in New York with a pair of new hires and senior leadership promotions.

“We are thrilled to have talent of the level of Wayne, Andrea and Gabrielle become part of our McCann creative family, and to promote Dan into his expanded role,” McCann New York co-CCOs Sean Bryan and Thomas Murphy said in a statement. “Dan has been behind some of our most award-winning work in recent years, from Lockheed to Army to the most recent Verizon work for First Responders. We could not be prouder to watch him turn into such a great creative leader.”

Best (pictured: standing, right) joined McCann back in September. After around two and a half years as an executive creative director with JWT New York, he left to co-found Cog in 2010. Prior to JWT, he spent time with Taxi and Fallon in creative director roles.

Gustafson (pictured: sitting, right) arrives at McCann following around a year and a half as a freelance creative director, following stints as a creative director with R/GA and adidas, and as a design director for Havas. Earlier in her career she spent two years as an art director/senior designer with Anomaly and four years as head of design for Johannes Leonardo. In 2010, she worked on the design of the Canadian Olympic team uniform and retail collection, and earned a Cannes Grand Prix for Diesel’s “Be Stupid” campaign.