Online platform Mailchimp hopes to have a big presence during the Super Bowl for its customers, but that won’t be on the broadcast feed of the game, nor the livestream. The brand hopes to bring attention to its small to medium business customers with a social media campaign that will run throughout the Big Game.

The campaign, “#BigGameSmallAds,” is designed to spread the love Mailchimp’s SMB customers through alternative messaging that highlights those smaller brands’ short ads on social media in hopes of reaching a bigger audience.

Mailchimp itself will have a presence during the broadcast, thanks to its first national Super Bowl ad that will be running during the game thanks to its new affiliation with Intuit QuickBooks. For this campaign, however, after each Super Bowl commercial airs live, Mailchimp will join the conversation through Twitter by sharing a small business alternative to the big brand featured in whatever commercial is airing.

The #BigGameSmallAds campaign will ​consist of live tweets from @Mailchimp featuring SMB customers in creative and visual commercial interruptions.

A promo video for the campaign shows a couple of clips of fake game ads, interrupted by a brief rundown of how the campaign will unfold, with quick hits of brands on the Mailchimp platform, including Monday Night Brewing beer and Square Pie Guys pizza.

“Why should the big name, big game advertisers have all the fun? We think small businesses deserve just as much attention, which was really the genesis and main motivator for this campaign,” said Michelle Taite, CMO of Mailchimp. “Given that Twitter is such a huge part of the big game—it’s where people go to praise and dissect all of the components of the game, including the crazy commercials that air, after all–we felt this would be a perfect medium to elevate our small business customers in a way only Mailchimp can.”

The tweets will acknowledge the products from Super Bowl advertisers in the Twitter ads for similar products of its customers, like an electric bicycle brand that will post on social when an electric car ad runs in game. 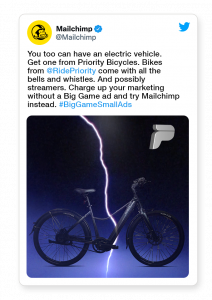 Mailchimp will promote Priority Bicycles with its SMB campaign.

The idea began with Mailchimp’s in-house design team, which wanted to play with the platform of Super Bowl advertising and incorporate Mailchimp’s brand voice in unique and fun ways to celebrate small businesses. That exploration crystallized into the concept of offering a small business alternative to the big brands in the Big Game—and help those smaller brands reach a bigger audience. The creative for the campaign was done entirely by the in-house Mailchimp team.

The #BigGameSmallAds campaign accompanies several initiatives before and after the Big Game. Before the game, Mailchimp and QuickBooks are partnering with the L.A. Rams to surprise three small business owners in Inglewood, California with a $25,000 grant each, plus one-year free subscriptions for QuickBooks Online + Mailchimp Premium. After gameday, the campaign will live on at the Mailchimp website, where people can learn more about all of the businesses featured in the campaign.

“From a design and production standpoint, we know there’s a lot of noise and buzz around the big game. So, to help our customers and their brands break through, our in-house creative team adopted a colorful, interruptive, static-like approach with ads that are loud in the best way possible,” Jeremy Jones, global campaigns director, Mailchimp, said in a statement. “Using Maximal design mixed with the language of the internet, our ‘Big Game Small Ads’ campaign provides a great contrast to the high-gloss commercials and production you’ll see in the big game. We’re hoping this gives us and our small business customer a competitive advantage.”