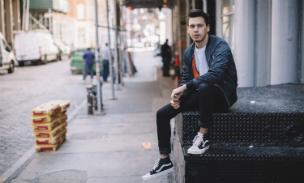 Based out of Los York’s New York office, Griffin will be tasked with leading creative content operations alongside Los York Studios senior executive producer Santino Sladavic, working with both agency and brand clients.

“Ecstatic to have Shane leading the way for Studio. He’s the next generation of creative in this evolving space,” Sladavic said in a statement. “He’s more than a commercial director and more than a designer, he is an all-encompassing visual artist whose work makes and sets trends.”

“What drew me to Los York is their core team of artists and their always-elevated aesthetic and design,” Griffin added. “As long as I’ve known Dex and Seth, it has always been easy for me to share in their vision and meld with their mindsets — we look forward to collaborating on some badass work and sublime storytelling.”

Griffin arrives at Los York following nearly two years as an artist with artist management agency and design studio Sunday Afternoon. Prior to that he spent two years as creative director for New York-based VFX studio Method Studios. He has also directed works for brands including Apple, Google, Microsoft, adidas and Ford and previously worked with Los York on “Let Your Red Out” for Apple’s iPhone 7.