So, you know Bill Crandall, right? Hell, we all know Bill.

He’s not just the CMO and founding partner of Stedman Crandall Business Development, he’s also a regular in the comment threads on a whole bunch of sites including this one and AdAge and some others we can’t think of at the moment. And he really never gave a shit whether the comments were anonymous, because he always used his real name and picture.

Those are some balls.

But his real favorite platform is LinkedIn, and yesterday he got some pushback from his connections for a post that compared Hurricane Harvey—which is still ravaging Texas and Louisiana—to the 2012 weather incident known as “Super Storm Sandy.” 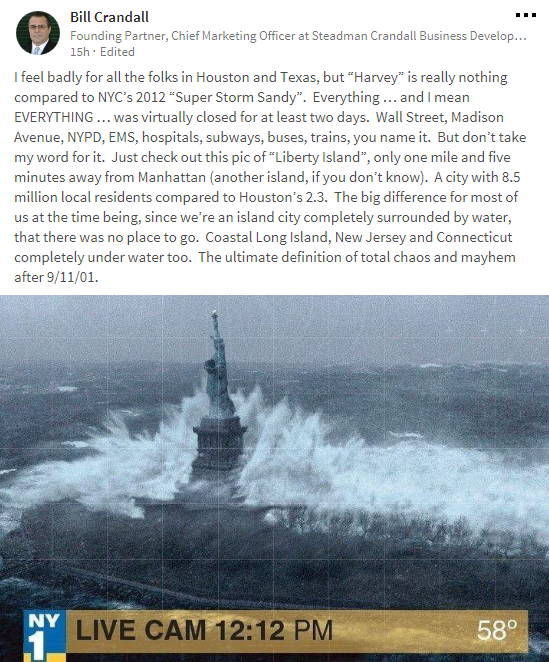 Soooooo, you can maybe see why people got a little pissed about this one.

First, it’s just not accurate to say that New York, Connecticut and New Jersey were all under water. Lots of areas did indeed get thoroughly screwed, including certain neighborhoods in Brooklyn and Manhattan and Staten Island for the NYC folks. Thousands of people were left without power, many homes were damaged, and public transportation didn’t fully recover for weeks.

It was bad, but it was nowhere close to what’s been happening in Texas over the past few days. Oh, and that is an image from the movie The Day After Tomorrow. There was no damage done to Jake Gyllenhall or the Statue of Liberty in 2012.

But the comments were all pretty negative, with people calling Bill insensitive and such. So he deleted the post and followed it up today with an explanation of sorts. Not an apology. 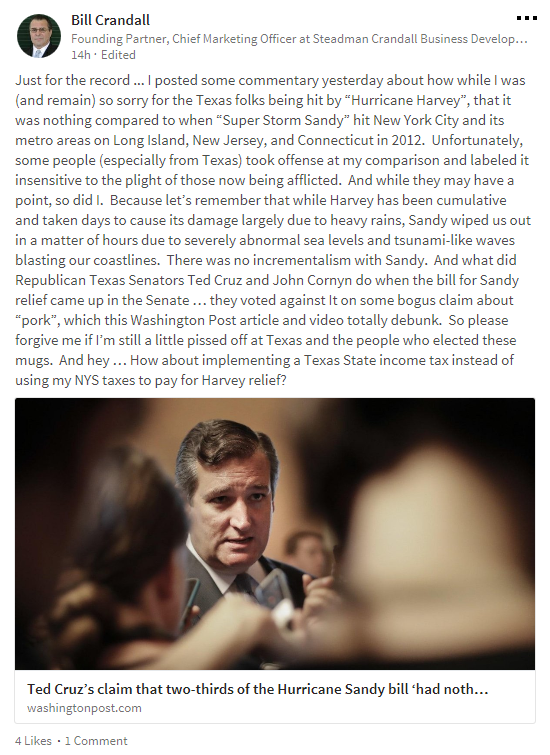 Now, this is really a different argument. Ted Cruz did indeed claim that the Sandy relief bill was loaded with “pork,” and even Chris Christie now strongly argues that he was wrong because Cruz is an asshole among assholes who does everything in the interest of shamelessly promoting himself and gets away with it because it’s not possible to primary him from the right in Texas.

And yes, anyone like John Cornyn who votes against bills to help other states recover from big storms and then begs for federal assistance when it happens at home is a typical piece of shit politician. This is not a strictly partisan thing, as Long Island Republican Rep Peter King proved by calling Cruz out. The only people defending Ted in that case were his former comms dude and fellow residents of “Kekistan.”

But again, this isn’t really the argument Bill was making in the first post, which was why people got all pissy about it. So far the only engagement on his follow-up comes from some guy who retweets Donald Trump Jr.

We haven’t reached out to Bill directly because we feel like he summed up his thoughts pretty clearly in the post today.

CORRECTION: As Mr. Crandall notes in the comments below, the “man among girls” tweeter sharing his name is not, in fact, the same guy. We regret the error.

UPDATE: To get even more in-depth on this very important story, it seems that Crandall shared our post on Facebook and then engaged in a somewhat contentious back-and-forth with critics. 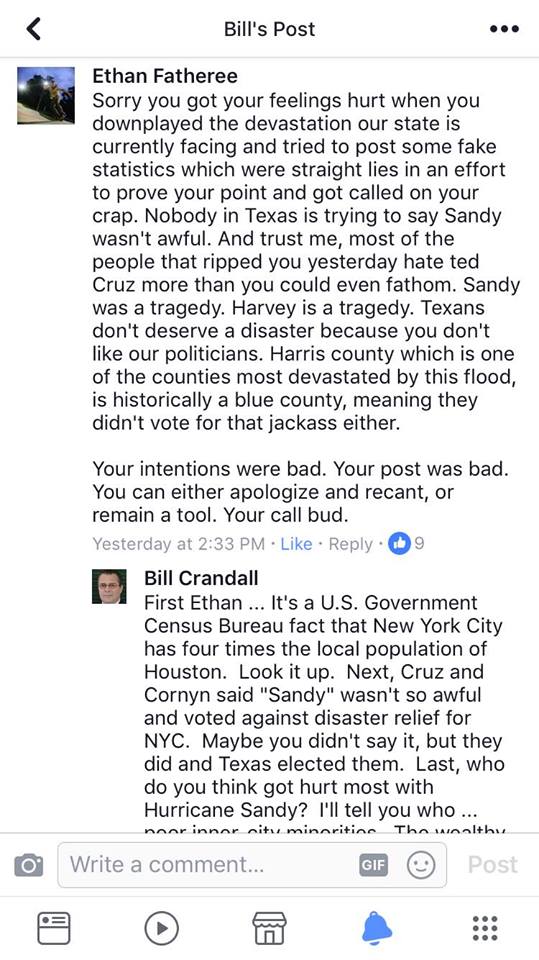 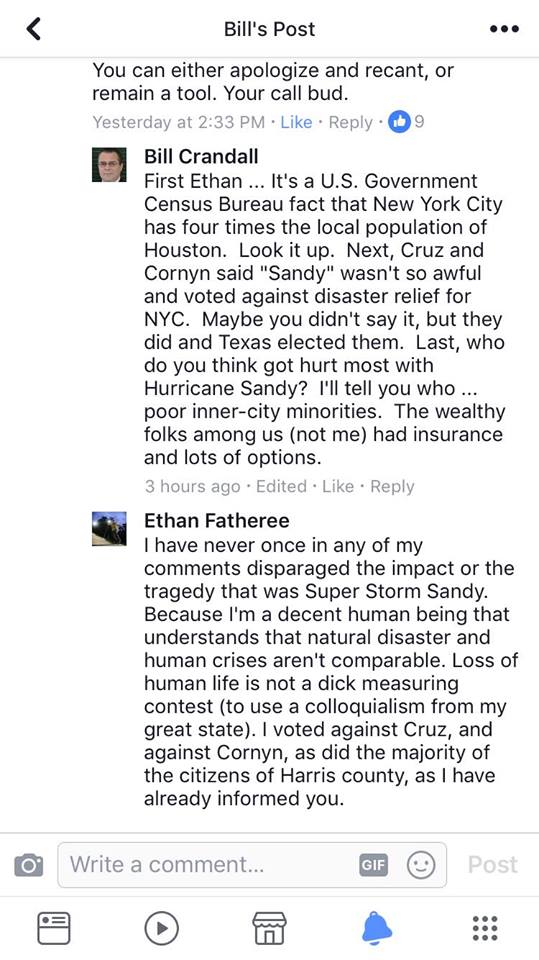 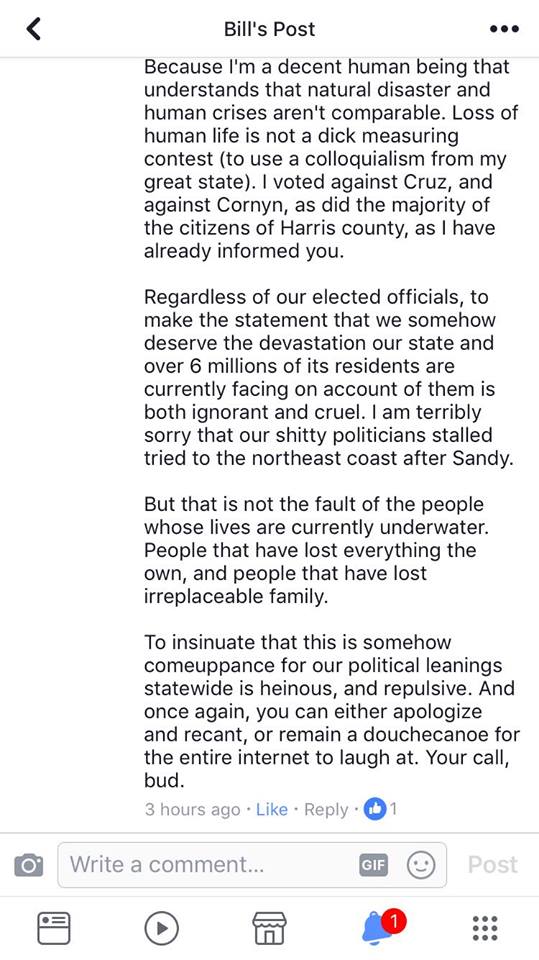 Things quickly descended into a racial identity debate before he deleted all related Facebook comments. Here are some more screenshots. 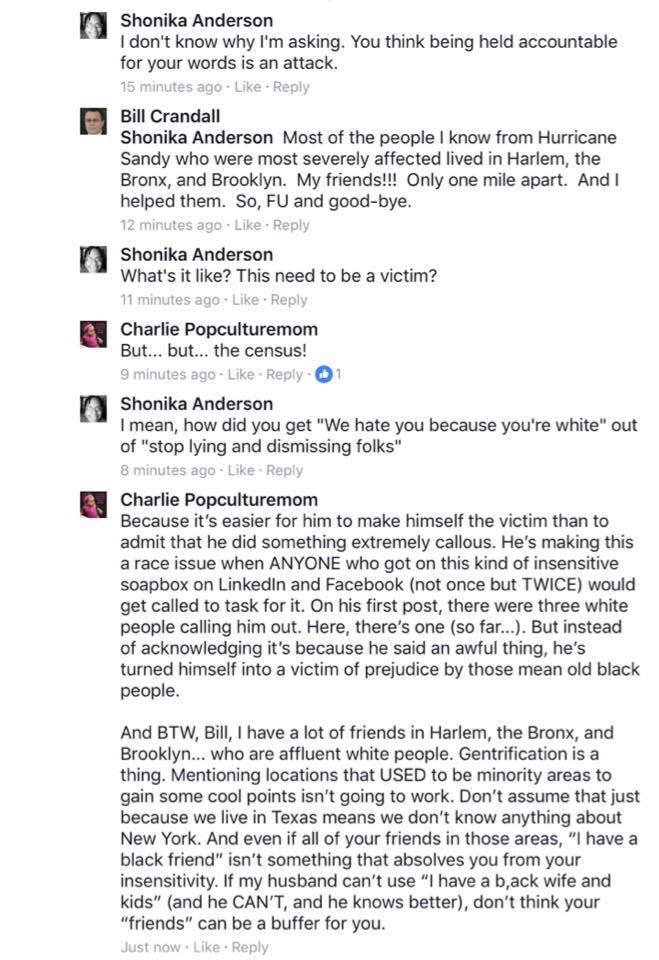 Isn’t it great how social media can bring us all together in arguing about everything?