UPDATE: Rest in peace, “controversial Kendall Jenner ad.” You lived for less than 48 hours, but in your brief life you brought pleasure and a certain … lightness to the lives of millions. Fortunately, you will be preserved forever thanks to Brightcove. Yay, technology!

Here’s the Pepsi statement, from The Daily Beast:

Pepsi was trying to project a global a message of unity, peace and understanding. Clearly, we missed the mark, and we apologize. We did not intend to make light of any serious issue. We are pulling the content and halting any further rollout. We also apologize for putting Kendall Jenner in this position.

Safe to say they hoped this would be their “Hilltop.” And love that last line. But also, this:

Do we have nothing more to be concerned about than a Pepsi commercial? Here’s one: the massacre in Syria of 20 kids & 52 adults yesterday.

Congratulations to everyone…we finally did it.

For one brief, glorious, truly amazing moment last night, every single person on The Internets was talking about advertising. And one ad in particular, even!

Is this actually the worst ad of all time? https://t.co/YJfwvBUF5C pic.twitter.com/LGEB4mRtkf

That was a bold rhetorical question, Wieden+Kennedy London. The Independent really got into it with the scene-by-scene breakdown. Key phrase: “I hate it deeply.” So did we all!

It was, like, sooooo many people, you guys! Who would have thought that the ad industry could somehow unite all Those Who Are Supposed to Hate Each Other??

I have a Pepsi.” pic.twitter.com/NW0sddKOOI

And here’s an insider’s take.

Also it’s a great example of what happens when you don’t have Black people around to give a different perspective. https://t.co/uwteVZAUEZ

Well shit, we should probably watch the damn thing after all that, right?

Wow. That was…a YouTube video with 3,000 upvotes and 22,000 downvotes.  The engagement numbers already have us all giddy.

For those keeping score at home, our favorite part was the moment when the cop looks at the Pepsi can like, “what are YOU doing here, and what the hell do you want me to do with this?”

The Pepsi team had such a great night that they were in a bit of a hurry to rush out statements explaining what that mess was supposed to be all about.

Here’s a statement I just got from Pepsi about their Kendall Jenner joins the resistance ad (story coming shortly on @Adweek dot com): pic.twitter.com/XIKDypVpvb

Some people are telling us that the negative attention is a good thing. Like, when was the last time you heard people talk about Pepsi without adding the words “halftime show?”

OK, but…no. And also, wouldn’t that argument imply that advertising doesn’t really matter unless it gets lots of (maybe awful) press because that’s the only way people will really talk about it in the first place?

Now the inevitable question: who made it? Here’s pitchman Brad Jakeman, who had a whole lot to say about agencies increasing their diversity numbers back in 2015. 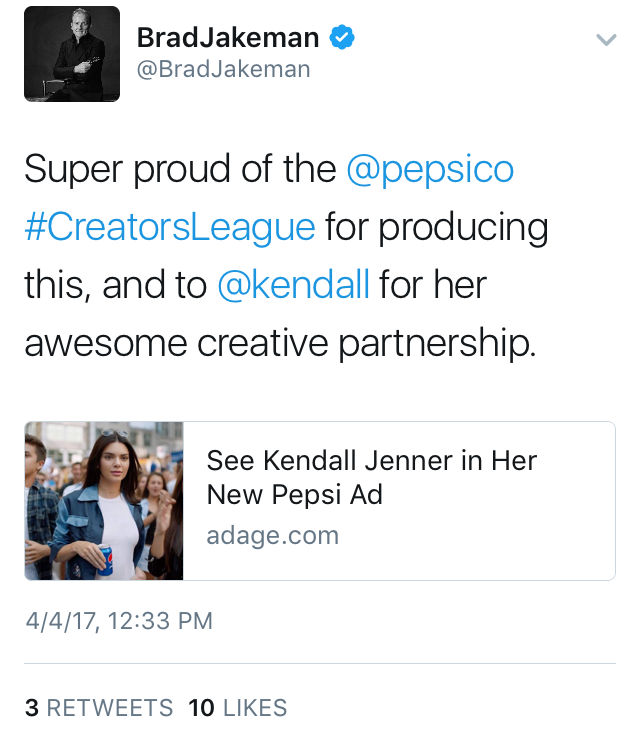 Jakeman later deleted this tweet after people ganged up on him and noted that he’d tagged the wrong Kendall, but the key info here is that Pepsi’s in-house agency, The Creators League, did the work.

(He also thanked the star properly.)

We’re equally honored to have you @KendallJenner. Thank you for everything. https://t.co/4owmaytkXM

The League got launched way back in the halcyon days of 2014 to make Pepsi “a little more like Red Bull.” It was described at the time as “pushing the boundaries for content creation and monetization and distribution” and former Pepsi CMO Frank Cooper III said this about its “branded entertainment” product: “For the most part they don’t’ really care that it’s delivered by a brand. It must be entertainment first.”

As you can probably guess, Cooper was long gone before this ad.

Just under a year ago, Creators became a physical space in SoHo, because “PepsiCo envisions selling enough unbranded content to cover the costs of creating ad content that does fuel product sales.” Digiday later took a deep dive into an organization that had “about 10-15 fulltime staffers.” Back then it was mostly handling post-production work, but its role obviously expanded—and now it’s cool with Mary J. Blige.

Someone faster and/or smarter than ourselves obviously discovered the full credits list. Here’s the press release. 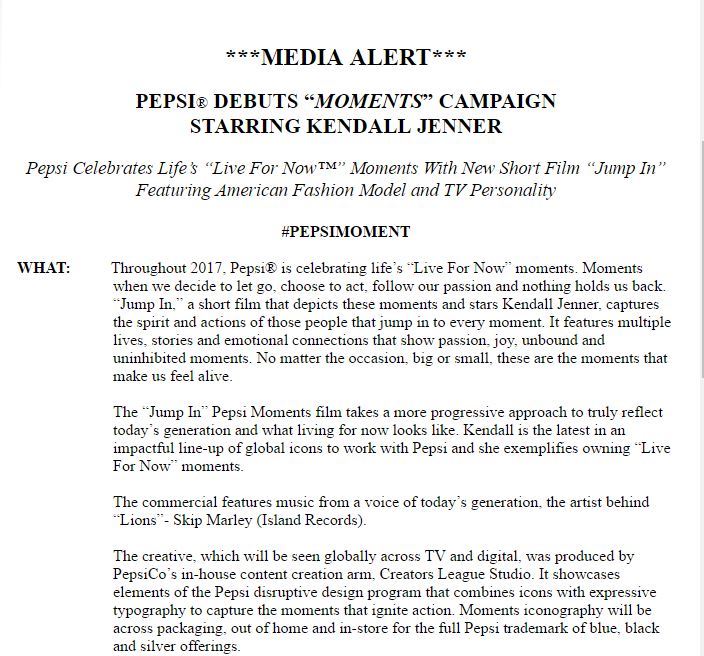 What a cultural moment this was.

For posterity, let’s remember those fleeting seconds before the backlash hit, when People magazine compared Jenner to Cindy Crawford and the always-reliable Daily Mail praised her “natural, glossy cropped ‘do.”

Our question for the agencies getting all self-righteous about this big doo doo bomb: would you do better? And have you done worse?

We personally can’t wait to see Pepsi’s in-house social media brand work after all this.