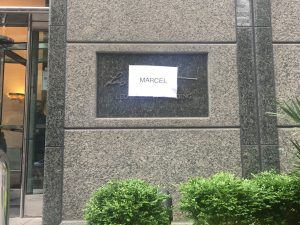 Yesterday, Publicis Groupe told the world at large that it would be skipping all awards shows and other promotional campaigns for at least a year in the interest of focusing those resources on its upcoming “professional assistant” platform, Marcel (named for founder Marcel Bleustein-Blanchet).

The news came as a surprise to many, including pretty much every creative employee across the Publicis organization.

Some at Leo Burnett Chicago responded in a way that would almost certainly amuse their agency’s namesake: by replacing his name beside the door of its Windy City headquarters with a piece of paper reading “Marcel.”

To refresh your memory, here’s Burnett himself announcing his retirement in 1967 while explaining exactly when his successors should take his name off the door. You’ve almost certainly seen this one before, but it’s worth watching again.

See, that was a well-spoken man.

His conditions include: “When your main interest becomes a matter of size just to be big, rather than good, hard, wonderful work…When you lose your humility and become big shot Weisenheimers a little too big for your boots.”

According to the employees involved, an all-staff email from new CEO Arthur Sadoun arrived yesterday right before noon, leading to “total confusion” as they texted bosses and ultimately relied on press reports like our own to figure out what was going on.

“It blindsided everyone,” said a Leo Burnett staffer regarding the email in question, which included a link to the “very unfortunate” video in which Sadoun, Mark Tutssel and others announced the pending launch of Marcel.

“Creatives are confused and concerned,” the employee told us. “Why cut costs by cutting one of the industry’s biggest incentives to deliver great work? Is AI really going to help solve our clients’ problems? Do I really want to work on a Chinese brief from my desk in Chicago? The whole project is tone deaf and de-humanizing.”

According to this report, Leo Burnett management has yet to respond to staff concerns, because they’re all in Cannes trying to win awards.

No word on whether the “Marcel” sign still obscures the founder’s name as of this afternoon.