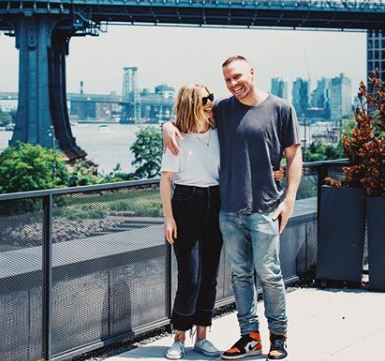 Jason Stein is moving on to greener pastures free of problematic pizza.

The Laundry Service founder and now-former CEO announced today on his Instagram account that he and his wife Alyson Warshaw, who was the agency’s CCO, will be launching a new company called Stein’s.

Seven years ago we started Laundry Service and three years ago we sold it to Wasserman. Now, Alyson and I are ready for our next chapter and have started a new business. It’s called Stein’s. We’ll be sharing more soon.
⠀⠀⠀⠀⠀⠀⠀⠀⠀
Early this year, I began working with Casey Wasserman, the Chair and CEO of Wasserman, on a transition plan for us to move on from Laundry Service and Cycle.
⠀⠀⠀⠀⠀⠀⠀⠀⠀
Alyson and I are entrepreneurs at heart. It’s in our DNA — our great-grandparents, grandparents, and parents built successful businesses. Both of us believe in taking risks, betting on oneself and doing what you love.
⠀⠀⠀⠀⠀⠀⠀⠀⠀⠀
We feel it is the right time not just for us to make this transition, but for the business as well. Laundry Service is the #7 on Ad Age’s A-List, Cycle is one of Fast Company’s Most Innovative Companies, and we are confident that the company is in able hands.
⠀⠀⠀⠀⠀⠀⠀⠀⠀
To all of the people who made the success possible — our clients and especially our coworkers — thank you, we love you. We are truly grateful and couldn’t be more excited. ❤️🙏🏻
⠀⠀⠀⠀⠀⠀⠀⠀⠀
With all of that being said, if you’re interested in collaborating, email me at jason@steins.co ‼️

Stein effectively confirmed reports that he had begun transitioning out of Laundry Service well before the company announced his departure on Monday. At the same time, the agency laid off at least 60 employees, according to the latest information from our sources.

We reached out to Stein on Monday regarding the Laundry Service news but did not receive a response; he has also not responded to a request for comment on his new venture today.

To date, Stein’s consists only of a webpage with a very light pink logo on a flesh-colored background.

As we all now know, Forbes broke the news yesterday that Papa John’s founder John Schnatter had used a racial slur during a May conference call designed to help the company avoid PR disasters. The story claimed that Laundry Service owner Wasserman resigned the account after learning about the incident. Today the company’s PR firm Olson Engage confirmed to AdAge that it, too, had broken ties with Papa John’s.

These stories all strongly implied that Laundry Service’s decision to end its relationship with the client had contributed to the layoffs. A spokesperson for the agency, which recently hired a third-party PR firm to handle media queries, declined to comment.