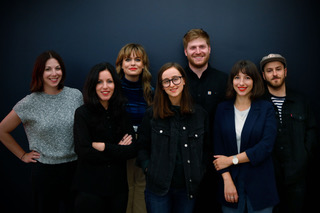 “This is a truly exciting time for Joan and we’re thrilled to expand our team,” Joan Creative co-founder and CEO Lisa Clunie said in a statement. “Our way of working combines empathy, strategy, creativity and an unusual way of interpreting the world around us. We look for talent that both understand our process, and can also add to it. We know that the people joining us today are true Joans and are wonderful additions to our team of thought leaders.”

The new hires come several weeks after the agency parted with one of its first two executive creative directors, Dave Canning, who went freelance last month, according to his own LinkedIn profile. Two junior creatives also recently left the agency, PR confirmed today.

Here are the additions:

Creative director Lindsey Lanpher joins the agency from BBH New York, where she has served as creative director since May of 2016, working with brands including Playstation, JBL, Grubhub, Hello Fresh, and Vaseline. Before that she spent three years as a copywriter with SS+K, working with clients such as HBO, The New Yorker, Wells Fargo, Sirius XM, Planned Parenthood, Jackson Hewitt and the Bill & Melinda Gates Foundation.

Director of creative services Rebecca Patrick joins Joan Creative from BuzzFeed, where she spent around a year and a half as senior creative resource manager. Prior to joining BuzzFeed, she spent over five years at Ogilvy New York, rising to creative manager before leaving the agency in May of 2017.

Gonzalo Herguet arrives as a senior designer from Johannes Leonardo, where he spent the past two and a half years as a designer for Adidas Originals. Previously he worked as a designer for Moroexe and as an art director for Buzzart and JWT’s SCPF. A former ADC Young Guns Finalist, Herguet’s work has been acquired by the Metropolitan Museum of Art.

Boris Opacic joins Joan Creative from Fallon Minneapolis, where he served as an art director for around two years, following a brief stint as a junior art director with Saatchi & Saatchi Wellness.

“Our people are everything and are hands down the most important factor in the success of our agency,” Joan Creative co-founder and CCO Jaime Robinson said in a statement.

“This goes for those that have been with us along the way, as well as these eight amazing people joining us now. Each of them represent different styles, skills, and backgrounds that our clients crave. We’re proud that they will now call Joan home, and are excited for all the things we will create for our clients, together.”