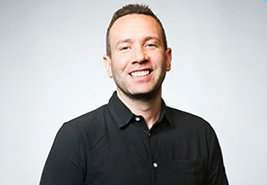 The global CEO of IPG Mediabrands’ Initiative, Mat Baxter, drew the ire of several LinkedIn commenters after he published a post saying he would be advising clients to “stay off” Facebook “entirely.” This is after the social network’s latest privacy scandal—which surrounds the New York Times exposé revealing that Facebook gave access to users’ private messages to certain companies including Spotify and Netflix.

“It’s about time we take a collective stand against the egregious behavior of Facebook,” Baxter wrote in the post. “Every time these sorts of stories surface they assure us that they are ‘trying harder’… enough is enough. I will be advising clients to stay off the platform entirely — hopefully when they feel the pain of lost advertising dollars things might just change.” 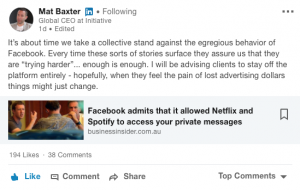 AgencySpy reached out to Initiative to see if the agency would really be telling clients (which include Unilever, Lego, Converse, Carlsberg, Liberty Mutual and Revlon) not to buy media on Facebook.

An agency spokesman responded, “Mat’s comments are his own—they do not reflect an official position of the network/company.”

“We take consumer privacy and protection very seriously,” Roth said in an email to AgencySpy. “As an independent advisor to clients, we navigate a complex media environment and must balance audience engagement with brand safety. We look to all media platforms to be transparent about their usage of consumer data and will continue to work closely with our media partners, including Facebook, to ensure we have the highest data and privacy standards for our clients.”

IPG did at one time have a stake in Facebook, reporting in 2012 that it owned 4.4 million shares. An IPG spokesman said the holding company has since “sold our stake entirely.”

Baxter did not respond when contacted directly via LinkedIn.

The suggestion is pretty bold for the chief executive to make and then give no further explanation. Perhaps Baxter was just testing the waters to see how the rest of the industry would react to such a suggestion.

“Over the past few days, we’ve been accused of not respecting people’s privacy settings and disclosing people’s private messages to partners without their knowledge,” Carolyn Everson, vp of global marketing solutions, Facebook, said in a statement to AgencySpy. “To reiterate, that is not true. People have questions about how Facebook uses information and what controls we give them. We clearly need to do more to educate them about their privacy options. This is a big focus for us heading into 2019.”

Everson continued, “Every day we work hand in hand with our advertising partners to help them grow their businesses and better serve their customers. We have a strong partnership with IPG agencies around the world and look forward to that continuing for years to come.”

Surely, Initiative has received calls from Facebook and clients since the post—and at least one of Initiative’s clients seems to be on board.

“Good on you for calling this out Mat,” commented Ben Campbell, senior global strategist at Lego. “It starts here — if the rest of the media network makes an ethical stance on this, we are on the cusp of a mighty rebellion. A rebellion based on values and moral compass, not just the pursuit of short-term metrics.”

In an email, Ben later said that his comment reflected his own personal stance on the matter and is “not representative of the wider views of Lego Group.”

Several other marketers were not as enthused by the idea.

To be sure, Shareef is not an average consumer (most of whom surely did not know Facebook was allowing Spotify and Netflix to spy on their private messages). YomConnect is a company that claims to help clients “run native content campaigns with proven influencers.” (Clearly, it would be in the best interest of that company for brands to remain on Facebook and its subsidiary Instagram.) 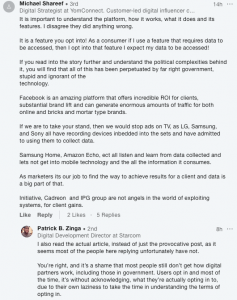 “You’re right, and it’s a shame that most people still don’t get how digital partners work, including those in government. Users opt in and most of the time it’s without acknowledging, what they’re actually opting in to, due to their own laziness to take the time in understanding the terms of opting in,” Patrick Zinga, digital development director at Starcom, commented, backing Shareef up.

Shame on you, average consumer, for being too lazy to dedicate hours of your time trying to dissect every bit of Facebook’s obscure privacy policy (which, by the way, does not explicitly list the outside companies allowed access to users’ “private” messages).

It should also be noted, BuzzFeed reported that Facebook was collecting sensitive user data from third-party apps, even when users said they did not want that information collected.

Graham Alexander, a marketing director in the U.K. for global media platform Teads.tv, also highlighted in the comments section an ongoing argument that Facebook might just be too effective for brands and agencies to quit it—no matter what it does.

As one anonymous media buyer frankly put it in a recent interview with Adweek, “If Facebook is performing well, it’s insulated from the news. At present, they’re performing well enough for clients to look the other way.”

“Effective but at what cost? Ultimately brands want positive associations and right now Facebook looks anything but…” he said.

Will brands have the willpower to quit?