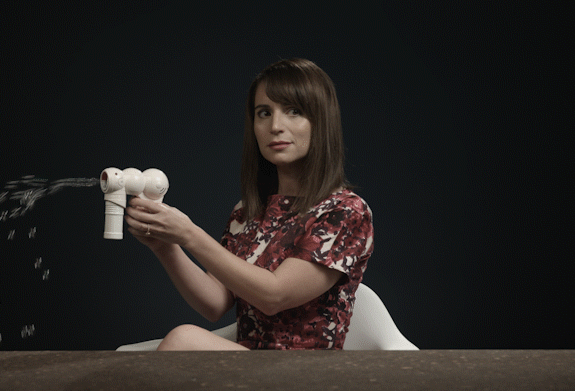 This is a guest post by Rebecca Coleman, founder and managing partner of Los Angeles agency Something Massive.

It’s not lost on me that the name of my agency, Something Massive, sounds like the punch line to an after-hours joke.

After almost 10 years in this business, I thought I’d pretty much heard it all … until a couple weeks ago. A few of my female colleagues recently attended an industry awards show to present a nomination, and the very first man they encountered thought it was appropriate to compare the name of our company to the size of his own genitalia.

Let’s reiterate that this was a formal industry event.

My team, with client in tow, had only just met this man. To deflect the offense, they politely pointed out that the joke was inappropriate.

Nevertheless, he persisted—and not in a way that would make Elizabeth Warren proud.

As the night progressed, the joke-maker’s tablemate suggested that the act of “making out” with our client might make her feel “wined and dined.” (On the contrary, it made her feel nauseous.) Not the type to just smile and nod, the women from my agency pointed out the idiocy of such an assumption, while the jokester’s male friend, who happens to be the CEO of another nominated agency, said nothing. He neither interjected nor apologized for his friend’s blatant display of misogynist disrespect. In fact, he laughed in camaraderie.

It was only when my tweet on the subject received a modest degree of attention online that this CEO felt compelled to speak up, arguing that the person in question was merely a “guest.” He proudly stated that his agency does not tolerate this kind of behavior.

Women from my company attended the @DigidayAwards on behalf of our agency tonight. This is how they were treated by men from another agency. #timesup @cindygallop @smassiveLA pic.twitter.com/zkirgx5Ad6

But it sure seems like he tolerated it while it was going on. And when did the universal rule of “you are the company you keep” become so subjective?

If there’s one thing we’ve learned from the recent wave of voices speaking out against any type of harassment, complicity can be just as detrimental, if not more so.

I want to be clear about one thing: I am not humorless. I can appreciate a good d*ck joke. Given the right context and delivery, they can be very funny and entertaining. There is room in this world for feminism and d*ck jokes to coexist. That said, let me stress context and delivery. I am absolutely not OK with a d*ck joke when it creates an uncomfortable environment, be that professional or personal.

In the aforementioned incident, it happened to be professional—which is why I’m focusing my attention there.

As much as I loved Mad Men, the year is currently 2018, not 1968 … yet the advertising industry doesn’t appear to have moved the needle as much as we’d like to believe. Even though there is considerably less day-drinking, the anonymous Instagrammers at Diet Madison Avenue have correctly noted that advertising is still very much a boys’ club. Two women couldn’t even make it through an industry event without enduring a verbal assault, and this type of tone-deaf behavior endures because it is so often overlooked and brushed off as par for the course.

Aside from common decency and respect for your peers regardless of gender, this was a fundamental case of misreading the room. Aren’t all of us advertising and marketing executives supposed to be experts in audience? Disrespect and poor comedic timing do not make for an effective combination.

There are simple, courteous ways to engage with your industry peers just as you would your clients’ would-be customers. They are, in essence, the basics of advertising.

No important message will be heard, received and acted upon if not delivered to the right person at the right time.

Online or offline, you have a brand image to cultivate and uphold. Don’t you want it to be a positive one?

Our cultural climate increasingly demands that brands and people draw lines in the sand. Silence is a position, too—and it’s not a good one.

This isn’t one of the building blocks of marketing, but maybe it should be.

I’m not sharing this story for the shock value because, honestly, no one is shocked. Instead, it’s a call for an industry I love to be better. A lot better. Moving mountains better. I know that we can do that because we are the experts in this stuff … if only we could all follow our own recommendations.

For the record, the event organizers have banned the jokester in question from all future events. It’s a small step in the right direction.