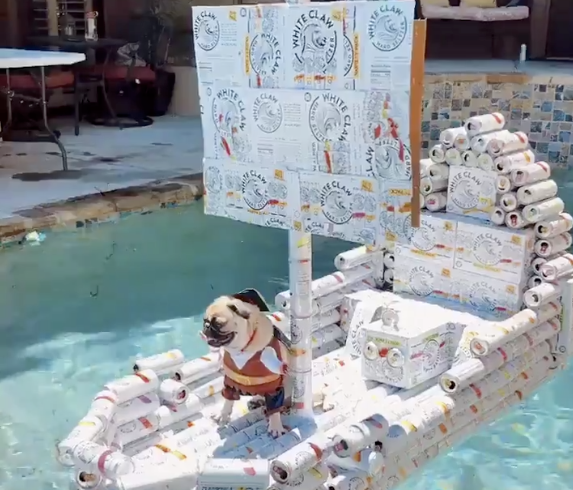 As the summer begins to wind down, let’s take a look at a fizzy fad from the past couple of years.

Hard seltzer, boozy sparkly water, whatever you want to call it—that combination of water, carbonation and alcohol has attracted consumer attention, particularly during the warmer months, and led to a bevy of brands seeking to ride the White Claw wave and cash in on the phenomenon.

Smaller regional brands have emerged to compete with White Claw: Bud Light Seltzer, Natural Light Seltzer and Truly, to name a few. So which ones are winning the battle for consumer attention?

Well, we got some data from social media analytics company Talkwalker on which brands are getting the most love on social media platforms. Talkwalker analyzed social media data across 23 hard seltzer brands for 30 days. Unsurprisingly, White Claw remained on top, with 77,000 mentions over that time span.

The runner up was Boston Beer Company’s Truly, for which Goodby, Silverstein & Partners won creative last November, with 14,700 mentions.

Nauti Seltzer of Westminster, Mass., was the most surprising brand listed. The regional upstart cracked the top five with 2,000 mentions, outperforming larger competitors like Natural Light Seltzer and Spiked Seltzer.

Regional variations also included Texas’ affinity for Mighty Swell and Cape Line, while Arctic Summer joined Nauti in performing well in New England. In the Pacific Northwest, San Juan seltzer was popular, and both Fick’s and Nauti were popular in California.

When compared by engagements rather than mentions, White Claw still comes out on top (with 400,000 engagements), while Spiked Seltzer finds its way into the runner-up spot, with 67,000 engagements over the 30-day period.

The top tweet about White Claw is definitely content we can get behind (even though we don’t drink White Claw):

I built a pirate ship out of my quarantine cans and put a dog in a pirate costume. I introduce the world to the S.S Clawdia and her captain Captain WhitePaw. @WhiteClaw notice me. pic.twitter.com/9GFFPKTJY1

Competitor Natural Light also generated some buzz with a post directly targeting the category leader (but the post suffers from a lack of dog on pirate ship made of cans):

We have a joke about White Claw, but it’s pretty tasteless

But that’s not all! We know you’re thirsty for some more seltzer insights and it just so happens Talkwalker also disclosed social data around flavor mentions. The most mentioned flavor over the course of the 30-day period was lemon (not that exciting, we know), which received over one in five of all mentions (20.5%) or 3,600. Mango was the runner-up with 2,400, or 16.2% of total flavor mentions. While watermelon just cracked the top five with 1,000 mentions, it also had highest percentage of positive sentiment of all the flavors looked at, with 51 percent positive sentiment. The flavor may have received an assist from Harry Styles, though.

OMG!! Harry Styles is partnering with White Claw to give one free watermelon flavored white claw with each purchase of his hit single “Watermelon Sugar” available on iTunes or https://t.co/2o5tZh3zDP. pic.twitter.com/LHNvK6TaPA

If you still can’t get enough carbonated alcowater, head on over to Adweek to check out last year’s hard seltzer taste test.