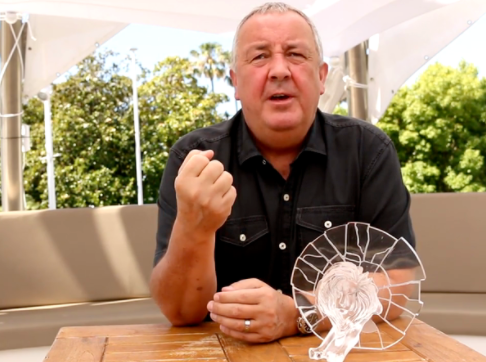 Yesterday we asked you, our angry, thirsty readers, to give us your honest-to-fucking-God opinions on Publicis Groupe’s “No Silo, No Promo, No Can Do” announcement that it would be skipping all awards shows and related events for more than a year.

And you did not disappoint!*

Of course, most of the takes you shared were very negative: the first we received simply read, “Fuck you, Arthur.” But there really was some nuance here, despite the general consensus that awards shows are ridiculous and silly and there are way too many of them.

Regarding Arthur Sadoun (who told AdAge today that he’s very surprised by the backlash), one reader called him “a showman,” adding, “A few years ago he proclaimed Publicis would become a leader at Cannes.  For two years he tracked progress. But when facts got in the way. He changed the story. The ‘Power of One’ was born.”

Sadoun had already started souring on Cannes back in 2015, when he told Digiday, “We reduced our participation this year by more than 50 percent. … The money we’re saving is going somewhere else.” That sounds oddly familiar.

Train ride from Paris to Cannes: 25 euros.  Showing up to announce you won’t be back next year: Prrriceless.

That was pretty good. But AdAge tells us, via their own internal calculators, that Publicis will save $2.2 million on Cannes 2018 … which is approximately 5% of the combined salaries of Arthur Sadoun, Maurice Levy and Mark Tetssel, according to numbers we just pulled out of our ass.

*the birth story of Marcel*

Publicis: ok, great! So we took the money you paid us and poured it into a half-baked A.I. for ourselves. We call it Marcel…Mark felt a little too on the nose. We think it will help you, but if it doesn’t, it will certainly help us.

Heh, nice one again. Marcel can’t be all smoke and mirrors though, right? One former Publicis New York employee who was bold enough to use her IRL Facebook account to comment on the former post wrote:

Part of what Marcel promises is to connect [frustrated] employees with teams and projects they’re interested in within the Groupe network, a basic function that humans in “Talent Development” could not seem to grasp during my time with the company. It’s a solid solution to a chronic clusterfuck.

That was unquestionably the most positive take on our new AI overlord. Others had some less optimistic things to say about Marcel.

…a talking robot that seems to do what the internet does … flim flam hiding thinness in thinking … disguised cost cutting to bury the failure of all of the agencies they’ve purchased.

Quite a few people are very skeptical as to whether all this money Publicis plans to save will actually go toward making Marcel the best global French robot network platform he can be. From a self-described senior executive:

The money saved from award shows isn’t going to fund this AI POS. It’s going to the bottom line.

But what if it’s all crazy enough to work? From one reader who really spent some time writing his or her (who are we kidding, his) responses:

Clients care about saving money more than anything. So it’s a bummer, but this will probably get Publicis more attention from clients than winning a bunch of awards.

The idea that they won’t promote themselves is utter bullshit—this announcement is self promotion … in two years, watch them turn it into a case study video and try to win awards for it.

That is maybe a little too believable. OK, so what are the downsides? According to most of the people who addressed this issue, creatives will not be so hot on staying with Publicis knowing that they won’t be formally recognized for their work. One chief creative officer wrote:

Yikes, this is a DISASTER for them. The real battle for these agencies is TALENT … and they just lost.

That tweet is obviously an exaggeration, but this decision—and the fact that Sadoun and other Publicis executives told some clients but didn’t alert their own employees—seems to have cemented the belief that they care about media dollars etc. more than the people making the ads.

By the way, it’s not just creative directors who win at Cannes. Another reader writes:

I’ve seen more than one CMO whose star has risen on Effies, advertiser of the year at The One Show, Marketer of the Year at Cannes, etc. Jim Stengel is a prominent example.

OK, so the main concern is still Publicis losing creative talent. But what about business? Here’s a cry for help from a European executive.

We are already strategizing on how to “protect” our brands from competitors. Of course other holding companies and consultancies will be angling to network with clients at DMEXCO and CES and Mobile World Congress. It will be a lot of work to defend business this way. That’s what we are worried about. Who cares about Marcel?

Will be pretty interesting to see whether that actually happens. Now how do the creatives feel about this move and the way it reflects on their bosses’ opinions of them? A couple of good ones:

Publicis creative girl here on a big global team. No one in our building can answer our questions. The last 24 hours have devolved from eye rolls to angry emails being circulated to people actually taking an hour for lunch. An hour! A couple of senior people left to go home at 4:30 … not exactly a morale booster.

Now let’s get to the heart of it:

We work nights and weekends. We miss time with family and friends in pursuit of pleasing our clients in a rapidly-changing business that all too often is completely thankless. But when we get an award, it’s validation. It’s the notch on the belt that you use to catapult yourself to your next job and to life’s next level. No more eating shitty Thai food because it’s “free” and you couldn’t afford anything else. You can finally afford to take a break, a vacation, some fucking time off. Take away the awards, and you might as well let clients do the work. In some cases, they already are.

Rant on, sir. And yet, maybe this will just be more of the same:

Yeah, they probably will. But in the meantime, they just pissed off thousands of employees around the world like the creatives above and the Leo Burnett staffers frantically texting their bosses and colleagues this week to figure out what the fuck was going on.

“Where’s the popcorn?” – us at other holding companies

Let’s do this again next week.

*There were, of course, plenty of tips amounting to “BRING BACK DISQUS,” to which we have to say: that is not something for us to decide.