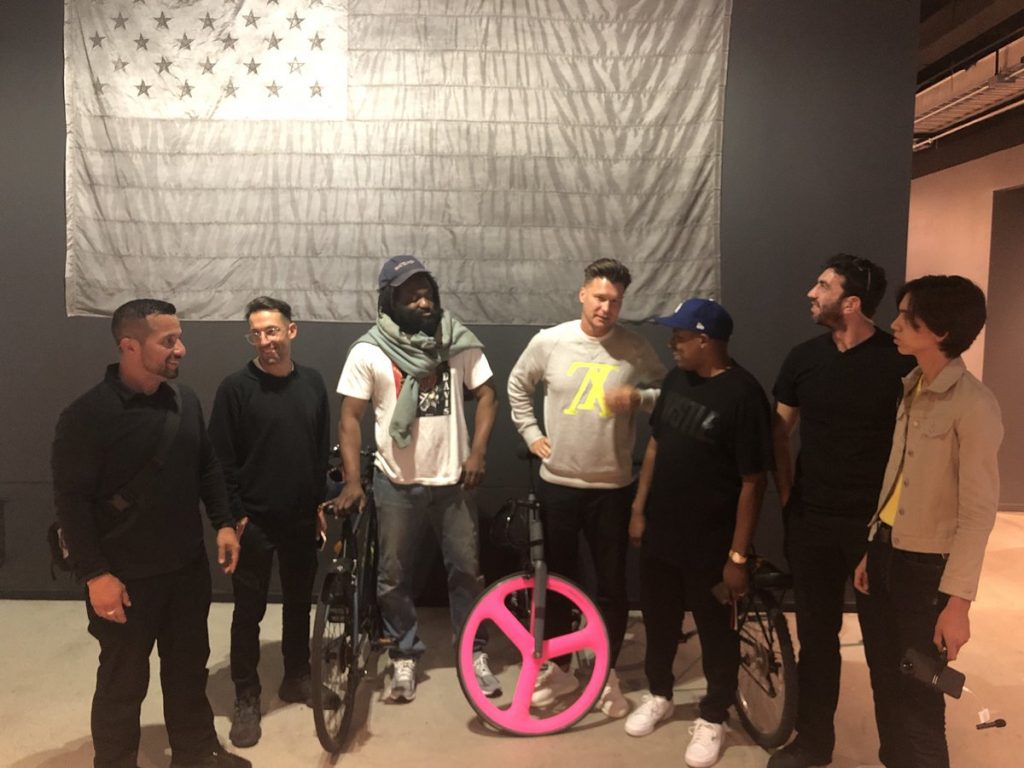 Around the same time a certain Chicago rapper had a very awkward moment with the President of these United States yesterday, leadership at Havas in the Windy City held a meeting that touched upon the elephant in the front lobby.

Of course you are aware of the story that prompted the AdAge writeup that prompted a debate over what, exactly, this was all about.

If you’re not, some things are indisputable: a Havas Chicago employee who actually used her real name on Fishbowl received a whole lot of written abuse from some anonymous souls who were brave enough to question her fitness to work in this business where people sell stuff to other people simply because she has very large followings on all the major social networks. Some of them may well have been Havas employees, but most were almost certainly not. We don’t really know!

This extremely unfortunate incident was positioned as the inspiration behind an installation in the front lobby of the Chicago office consisting of anonymous comments taken from the Havas-specific bowl on that same app (which, unlike the main thread on which the woman mentioned above posted, is limited to those who actually work at the agency).

Some of the comments in question were offensive, and some were apparently placed on the wall by the very people who wrote them. Many were criticisms of agency leadership or of CCO Jason Peterson himself and his one million-plus Instagram followers.

As he put it, the hate of his own employees is his anthem. This display led to some confusion over who was the bully and who was the victim. 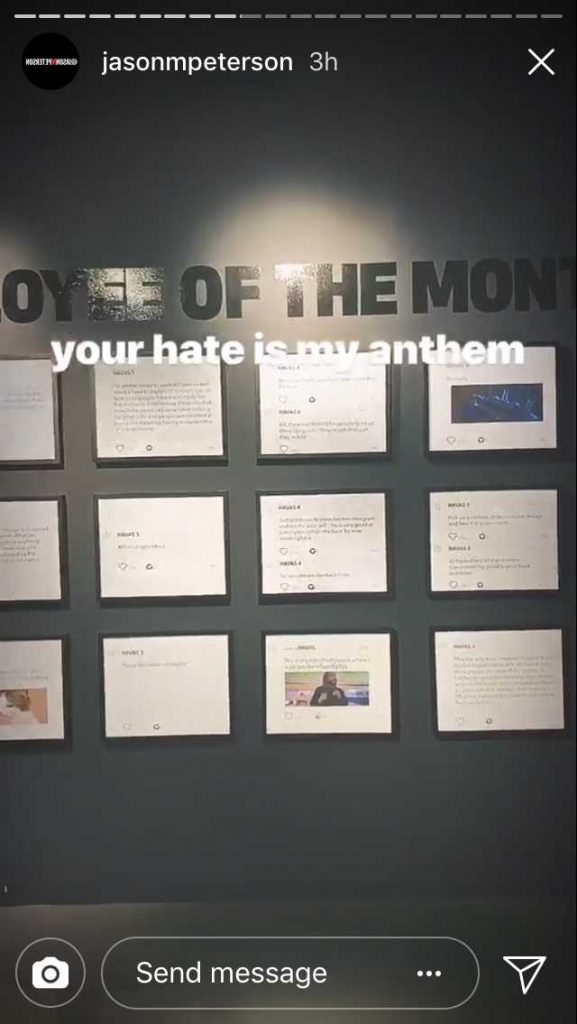 The “Employee of the Month” title struck more than a few as passive-aggressive—as did a booklet released by agency leadership in which they effectively told staffers who complained about their experiences on an anonymous app that they could very well leave via “conscious uncoupling” whenever they chose and provided them with some resources to do so. 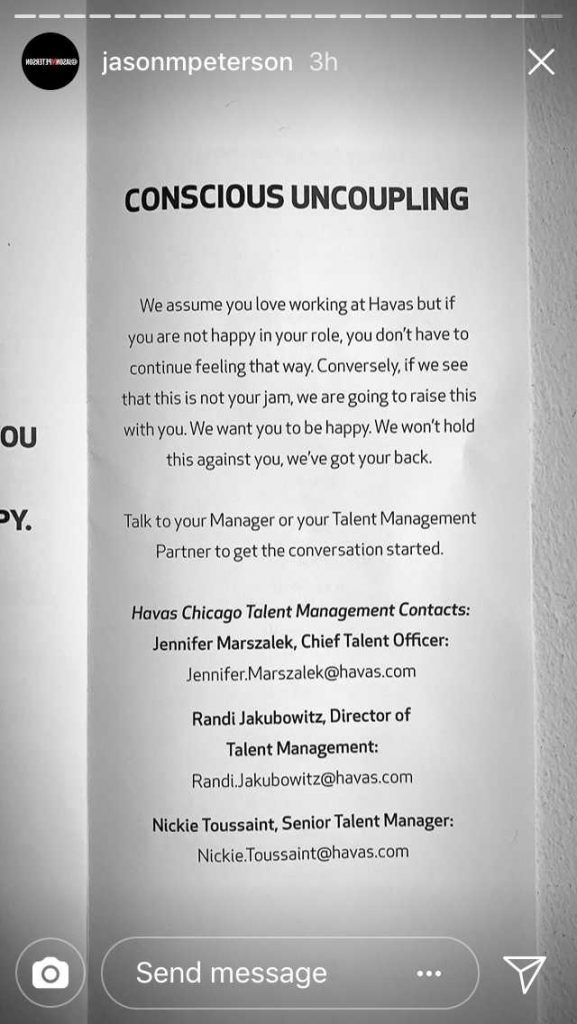 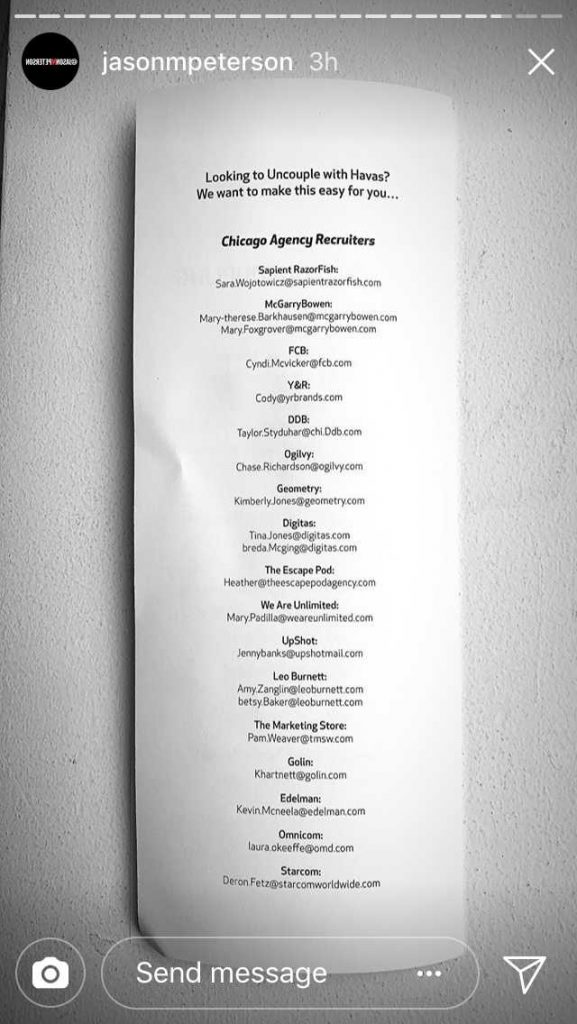 We must note that the Instagram story in question included an image of who else but Ye himself and that Peterson proceeded to share many supportive messages, at least some (if not most) of which were from people who enjoy his black and white pictures but have never worked at his agency.

A few employees also responded by writing they do indeed enjoy working at Havas Chicago and will continue to do so, while others offered the same observation with a qualifying “but…”

According to sources within the agency, however, the conversation grew so big that it threatened to overshadow everything else going on in the office. So they decided to address it.

This whole brouhaha also came just over a month after the internal video starring Peterson and CEO Paul Marobella, in which the former referred to Leo Burnett and BBDO as “shitty agencies,” went semi-viral. Global CEO and chairman Yannick Bolloré, who is now running both Havas and Vivendi, was unaware of the video but insisted, after learning of its existence, that he personally approve all future entries in the series.

But back to the meeting.

Earlier in the week, Peterson sent out a Facebook invite to employees in Chicago using the Age story as a prompt. 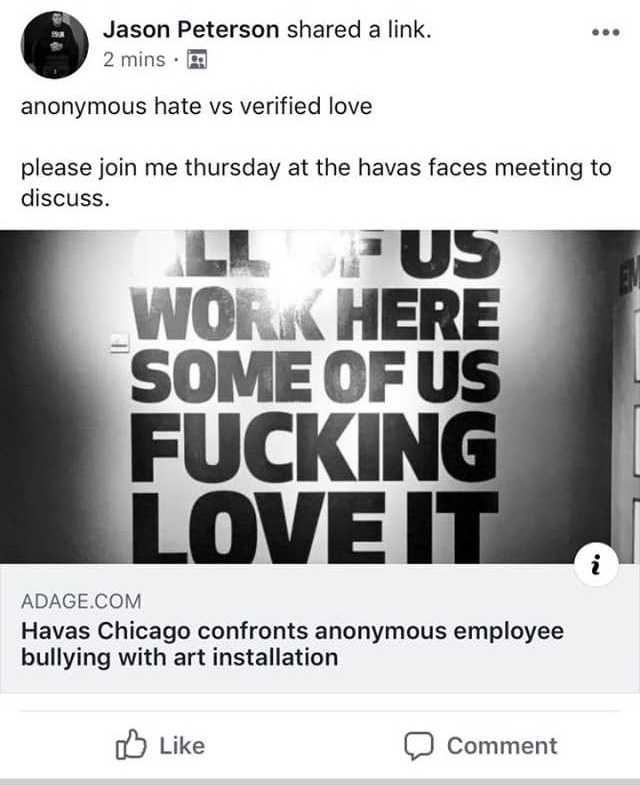 He also posted an Instagram photo, now deleted, that seemed to reference the issue, writing, “fight fire with fire.” (The fire in this case presumably being an aggressive response to internal criticism.) 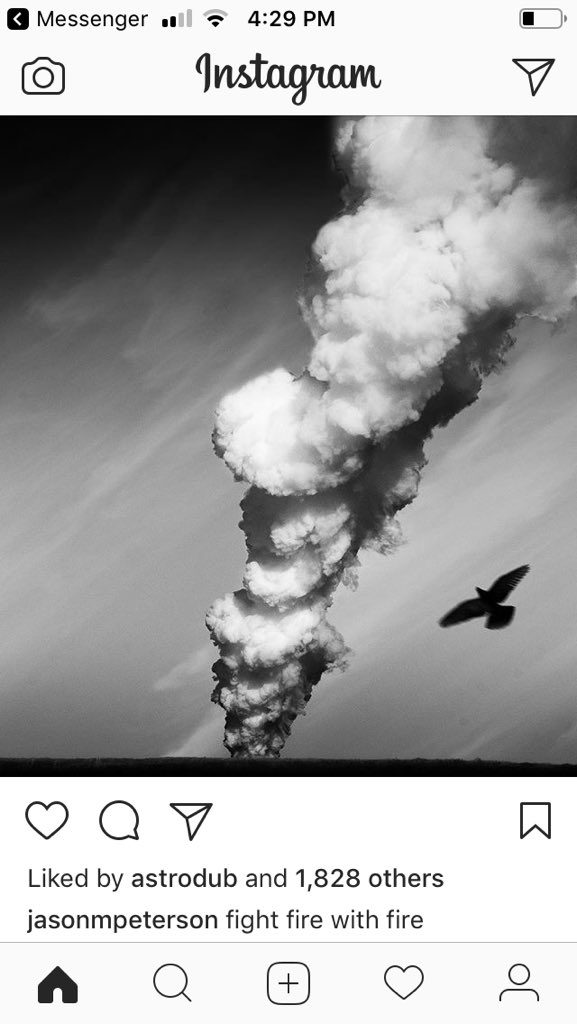 But the meeting was not organized by Peterson, nor was it all about him. As his invite indicates, it was part of Havas Faces, a series of regular discussions primarily concerning matters related to diversity and inclusion. We are told attendance at these meetings is not mandatory, though we also hear the invite went out to everyone who works under Peterson.

The conversations at this particular gathering did not all concern the Fishbowl comments, the resulting installation, or the response to it. (And FWIW, the installation was removed earlier than planned for a new one dedicated to breast cancer because it was so very distracting.)

But Faces had to address the charged atmosphere. According to two current Havas Chicago employees who attended, all were asked to write their names, email addresses and titles along with something they liked and didn’t like about working there on cards.* They then placed this paper in a bucket and passed it around, with each attendee picking one card and reading it aloud to the crowd.

One party said he or she felt “trapped” during the exercise, though we’re also told it’s a regular practice.

*UPDATE: After this story initially ran, another party who also attended the meeting clarified that employees were instructed to list their identifying information and their opinions on separate cards, meaning the likes/dislikes remained anonymous, contrary to the implication in the original version of this post that all the information was written on a single card. As noted above, though, at least one event facilitator did reportedly tell attendees to list titles and email addresses in addition to names.

All sources said Peterson spent a few moments directly addressing the Fishbowl/ Instagram lobby controversy. He apologized if it had offended anyone before adding, “I’d do it again in a minute.”

There the conversation ended.

A Havas spokesperson declined to comment beyond providing the same quote that went to AdAge calling the installation a response to “hateful online commentary and bullying that exists around some of our employees.”

Some current and former Havas staffers, however, do not agree with that characterization.

Another party within the agency claims that all this attention has led to hundreds of job applications. Take that as you will.