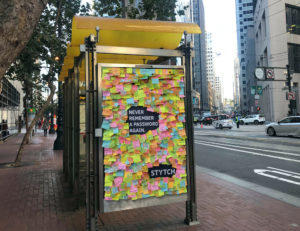 -Nobody likes to have to enter in passwords to every different site. Stytch, a developer platform for passwordless authentication, is telling people they can forget about forgetting passwords in its new “Go Passwordless” campaign by Division of Labor. Sentiments on billboards, bus shelters and buses in San Francisco include “Forget Forgetting Passwords” and “The Entire Internet Needs a Password Reset. A memorable OOH placement includes converting transit-shelter poster boxes into 3D creative installations highlighting the ridiculousness of writing down passwords on Post-it Notes.

The Division of Labor team went to great lengths to create the notes for these installations, writing more than 5,000 Post-it Notes with varying bad passwords, written in a range of different handwritings for authenticity and visual interest. The effort took three different dinner party sessions, one turning into a fundraiser for Ukraine raising $5,000—and another as a service project for a group of middle school students.

-Through a campaign set to run across 15 countries in association with Ukraine’s Ministry of Digital Transformation, Ukraine has declared bravery its largest cultural export.

-The Hooligans Agency is bringing Hollywood savvy and entertainment kick to political ads.

-Independent media agency Crossmedia (XM) has already had 10 boomerang employees, thanks to a culture that has been focused on DEI for a long time.

-The producers of RuPaul’s Drag Race are breaking into consumer packaged goods for the first time with a line of canned cocktails.

-As Adweek continues to roll out new programs as part of the Adweek Podcast Network, the next one to join the lineup is Brave Commerce.

-“See the Bubly Side” from creative agency TBWA\Chiat\Day New York utilizes Michael Bublé in a new way for the sparkling water brand, this time breaking dishes and not caring.