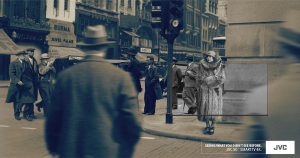 The new effort promotes the brand’s 50-inch 4K Led TV line by using print-only graphic pieces that transport the viewer back to scenes in history, part of which is presented with new clarity.While the majority of each old photograph retains their dated blurriness, a section is restored with the same clear focus one can presumably expect to find in a 4K TV.

-Are you a fan of horror? Bring on the fake gore: Heinz is encouraging creators on TikTok to use its product as fake blood for a horror film contest.

–A&W pokes fun at Americans in a new campaign that revisits one of its failed product launches, the 1/3rd pound burger.

-For Latina Equal Pay Day, Adweek talks leveling up and combating the pay gap among Latinas.

-This Call of Duty ad showcases very realistic graphics as real-life war photography experts enter the game’s engine to actually capture the environment of the franchise’s next installment, Vanguard.