-Olympia Provisions, a charcuterie maker from Portland, Oregon, is taking on “big meat” with a series of commercials from Undnyable. The agency put founder and Head Salumist Elias Cairo in front of the camera to let America know that most of the salami and sausage they eat is, in his words, “sh***y.” One spot, “Slap,” features Cairo slapping crappy meats out of the hands of unsuspecting mannequins in an effort to combat corporate salami and other cuts of meat.

-The ANA released its Trends in Agency Compensation survey and found there’s still some question of how to pay agencies in a way that satisfies everyone.

-Samsung saves money in Europe using AI to build its various digital banner ads that run across platforms including TikTok, Instagram and Spotify.

-In other stunt news, a new fragrance has been launched, courtesy of the Florida Lottery.

-BETC Paris hit the nail on the head about the feeling you get when your favorite TV shows falls flat on its face during a series finale.

-In an adventurous twist on typical call-for-entries campaigns, New York-based creative studio Karlssonwilker has developed a throwback arcade video game that showcases over a century of past winners and provides potential discounts for entries into this year’s ADC 102nd Annual Awards. Modeled after 1980s-style space shooter video game, ADC Gold Cube Blazing Time Invasion is a single-player shooter arcade game that pits players against generations of award-winning work from the ADC’s annual competition. 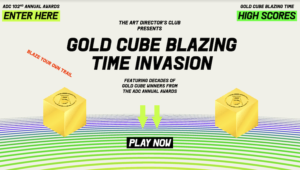 The ADC 102nd Annual Awards has gamified its entry page.