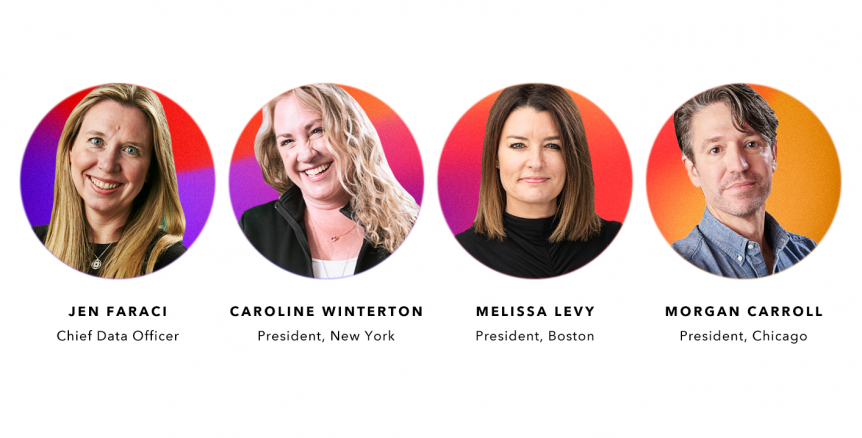 Digitas has promoted four veteran executives to leadership positions. Jen Faraci has been promoted to chief data officer while Caroline Winterton has been elevated to president of the New York office. In addition, Melissa Levy becomes president in Boston and Morgan Carroll has been named president of the Chicago office. The executives represent a combined 37 years at Digitas and the promotions were made to address agency growth.

Faraci, a 12-year Digitas veteran, will lead the agency’s data and analysis teams as well as Publicis Groupe’s global data intelligence practice. She has been instrumental in multiple Digitas and Groupe-wide pitches, helping the organization attract and retain critical clients.

Winterton becomes the leader of the New York region, which includes Atlanta, overseeing a team of over 600. In over two years in her previous role as managing director for New York, Winterton drove growth and success for the office, with clients including Comcast, Mondelez and Under Armour. Previously, she served as the CEO of Barton F. Graf and as a partner at Grey.

Levy will continue to lead account management for North America in addition to her president role in Boston. She built a strong culture as managing director of the Boston office across a team of over 450, with clients including Talbots, CVS and Inspire Brands. Levy has been with Digitas for over 15 years, having started her career in startups and ecommerce.

Carroll oversees the Chicago region with a client roster that includes Whirlpool, KitchenAid, Maytag and Mizkan brands. In his previous role of managing director, Carroll led the office to year-over-year growth, overseeing both business objectives and creative output for the region. He has been with Digitas for eight years, working as a creative before jumping to leadership.

“We are thrilled to announce the elevations of Jen, Caroline, Melissa and Morgan, four incredible leaders with a long tenure—a combined total of almost 40 years at Digitas. Each of them is amazing and together they will drive even more growth for our talent and our clients in 2022 and beyond,” Michelle Tang, CMO at Digitas said in a statement.